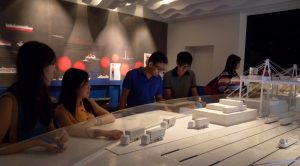 Singapore 23 April 2015. Sailors’ Society, one of the largest seafarer support charities operating internationally, is to sponsor four scholarships on two diplomas offered under the MaritimeONE programme.

Under the terms of the sponsorship, the charity will invest S$10, 000 to fund a three-year scholarship covering the cost of studies for students taking the Diploma in Marine Engineering or Diploma in Nautical Studies.

Sailors’ Society Chief Executive Stuart Rivers says the sponsorship is an active demonstration of the charity’s commitment to training and education alongside its pastoral role.

“As Singapore’s maritime cluster has developed, so its importance to seafaring has also grown strongly. The challenge now is to attract and educate the young people whose skills are needed in future and provide them with a path that leads them into the shipping industry. Education is one of our three key objectives and we are proud to be playing a part in the MaritimeONE Scholarship programme.”

The programme is an initiative spearheaded by the SMF and its industry partners, who have pledged their commitment to education in Singapore by providing funding for the scholarships.

SMF Chairman, Michael Chia welcomed the award of sponsorship which will help to attract more young talent into the maritime industry.

“We are very grateful to the Sailors’ Society for its generous support of the MaritimeONE Scholarship programme. By working with high quality industry partners, we hope to collectively raise awareness of the maritime industry as well as to improve the profile of education and career opportunities to potential students, encouraging more young people to enrol in maritime-specific courses and pursue a maritime career.”

To date, 200 MaritimeONE scholarships have been awarded by more than 36 sponsors – funding either part or all of the scholars’ study period. In 2014, the SMF awarded 40 scholarships to promising young people, to pursue either diploma or degree education both locally and abroad.

About Sailors’ Society
Sailors’ Society is an international charity that seeks to transform the lives of the world’s 1.5 million seafarers and their families, in port, at sea and at home. The charity offers practical help, emotional and spiritual support, financial assistance and family liaison. Our port chaplains visit thousands of ships every year, directly addressing the needs of seafarers – irrespective of a person’s belief or nationality – as well as maintaining vital links within the ports where they operate.

All aboard! 300 Hull schoolchildren set sail on the Humber thanks to ABP and Hull Children’s University

Shipping industry calls on EU leaders to be decisive…