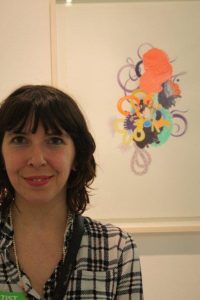 She compares the impetus for much of her work to imaginary “vibrant sea creatures, becoming alive.”

Blandine Bardeau, who has just greatly widened her circle of followers while exhibiting at The Other Art Fair (which during April 23-26 2015 provided a showcase for 130 independent artists) in London, bases her concepts on what she calls “ephemeral sculptures that never existed.”

If, on first hearing, this sounds hard to fathom, a first viewing of her mixed-media drawing and collage such as “The Jellies Series” will dissipate the doubts. These framed works on paper – she has also worked on translucent polyester and glass – are truly intriguing.

They are a form of still life but, as she phrases it the “biomorphic amalgams, collaged and copy-pasted beings, crawl out of their frames, leaving behind traces of colour and paint.”

They are structures that take form as she works on them without a finite plan, but appear in the completed version to be immaculately calculated though superbly supple. Abundant and various components are entwined as if conversing or even coupling. This openness to kismet allows her to create a succession of “seemingly impossible, ” unruly structures.

Her props are ever changing as in an episode of a dream. Blandine explains that these are fragments from her own soft sculptures, sea creatures, objects, yarns and jewels. “They allude to imaginary, play-based ethereal fragments of the imagination, yet they are also solid composites, amalgams.”

In the end, a three-dimensional, floating surrealism – the product of acrylics, felt-tipped pen, fountain pen, coloured pencil and so on – bursts out of the flatness of the paper.

Blandine, originally from Toulouse, France, says that the works she showed at The Other Art Fair refer to her early love for, and training in, intricate, time-consuming academic coloured pencil drawings, combined with collage techniques.

She studied womenswear fashion design at Central Saint Martins, and after graduating created from colourful plastic tubes jewellery that was exhibited in a Selfridges’ window, and developed her passion for soft sculptures and two- and three-dimensionalities at Glasgow School of Art.

The choice is there in Blandine’s artwork: illusion or reality!

Fan turned up for final day in Hyères