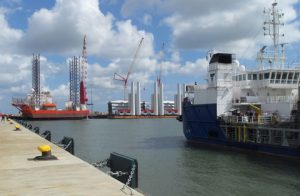 Grangemouth, 5 May 2015 – As part of its continuing strategy to focus on growing business sectors in the UK, GAC has opened a new quayside office in Great Yarmouth to meet the needs of the renewable energy sector in the Southern North Sea for integrated shipping and logistics services.

Offshore energy
Great Yarmouth, along with neighbouring Lowestoft, has supported offshore energy companies for over 45 years. The two ports constitute England’s largest concentration of offshore energy businesses and have been involved with many Round 2 projects. Round 3 includes three of the world’s largest offshore wind farms which represent over 60% of the UK’s Round 3 developments.

Adrian Henry, GAC UK’s Offshore Manager, says Great Yarmouth has been identified as being one of the key locations for development and notes that the new facility there reinforces GAC’s national network with an office ideally situated to meet the needs of oil and gas customers working in the Southern North Sea.

The area is also home to some of the UK’s largest renewable energy projects, including offshore wind farms at Gunfleet Sands and Thanet. The United Kingdom ranks as the world’s sixth largest producer of wind power. In January 2015, the country had 5, 968 wind turbines with a total installed capacity of just under 12 gigawatts, one-third of which is generated by offshore wind farms.

Prime location
GAC’s efforts to meet the growing demand of the renewable energy sector for support, including the transportation of large project cargoes like turbines, is now being spearheaded by the Great Yarmouth team led by Jeanette Shoebridge.

“GAC’s presence in Great Yarmouth brings our unique single-source combination of shipping and logistics services to a wide range of energy clients, ” says Shoebridge, who has worked on major installations at London Array, Walney 1 & 2, West of Duddon Sands over the past four years.“Our prime location means we can offer all renewable clients an integrated support package tailored to their needs, including a quay for their support vessels, ship agency, project logistics, warehousing and other related services.”

“Combined with the local expertise, workforce, deep water facilities and hinterland, this enables us to provide unrivalled response, flexibility and – ultimately – cost savings. GAC’s global expertise and commitment to delivering our customers’ strategies will be a significant factor in the successful completion of Round 2 in the Southern North Sea, through Round 3, and beyond.”