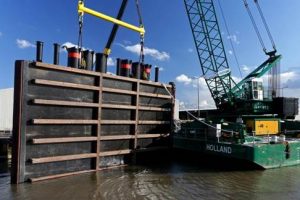 Following a £5 million project to replace the inner and outer gates at Grimsby’s Royal Dock, the Port of Hull has now seen the replacement of a set of gates at King George Dock.

The new inner gates, which each measure over 24 metres wide and 13 metres high and weigh-in at an enormous 140 tonnes, represent a £3 million investment by Associated British Ports (ABP) in the Port of Hull’s infrastructure and will improve resiliency on the port estate.

“The old gates had been in situ for over forty years and had gone past the point of economical repair, ” said Kevin. “It was essential that we invest in new equipment to ensure the lock gates were fit for purpose and met the needs of ABP and its customers, as well as other port users.

“It was decided that investment was needed in the inner gates first and foremost, and the decision was taken to replace them completely.”

The old gates have now been replaced by brand new bespoke steel, semi-buoyant equipment, which has been fabricated in Holland by specialist marine engineering firm Ravestein.

The gates have taken nine months to construct and were brought over to Hull from the company’s base in Deest by barge. Crane barges were used to remove the old gates and install the new ones, and the old gates will be taken back to Holland to be dismantled and recycled.

The entire replacement process took a week to complete and the lock at King George Dock is now functioning as normal.