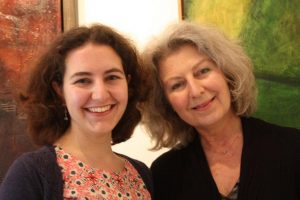 They are affectionate mother and daughter, both practising artists, but their work occupies opposite ends of the spectrum.

Athens-born Monika Veriopoulos is fascinated by the effect and symbolism of shadows, and many of her works look ethereal and ghostly. This is so whether she uses charcoal or oil on board. Her daughter Alexandra Buhler favours the medium of oil pastels to accomplish still life in which fruit and vegetables are firmly earthly, and earthy. 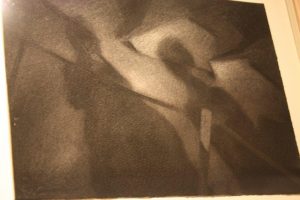 Before Dark. Charcoal. By Monika Veriopoulos.

The two have been working in tandem over the last few months to produce engrossing new works for their London exhibition at the Piers Feetham Gallery in Chelsea. They admit this generated some nervous tension, but on the opening night of their first joint show they were relaxed and all smiles.

Friends from the Greek community, Alexandra’s fellow students, businesspeople, and avid art collectors were among the considerable crowd who made their way to the gallery.

Monika had 18 works on show, within their frames casting perplexing shadows, outlines fugitive and tenor hard to pin down. This theme of shadows has resonated with her since her childhood in Greece where shadows can be harsh, etched for much of the time by the sun blazing from a bright blue sky.

The definition in her works is far from the Greek radiance, instead being marked by subtlety. The viewer asks, are these silhouettes lovers, or symbols of love? Is there a clue in the title of one of the works,  Persephone, for this goddess is the queen of the underworld, but also the giver of spring growth. Such ambivalence is of a piece with the fluctuating nature of the shadow world.

Shadows have taken over as a main theme of her work for the last five years.

Socrates would have understood. Monika remembers the passage in Book VII of Plato’s Republic,  in which the philosopher holds forth to a follower on the nature of reality by telling of men imprisoned in a cave who believed that the shadows and images cast by fire on a wall were the true existence.

Some of Monika’s latest pieces were executed in London, and others in the Cyclades, in her favourite island.  Which island? “It’s a secret…”

Indeed, Monika has kept in touch with her Greek roots while in the metropolis, where her solo shows have included one at the Hellenic Centre, as well as at the Chelsea Arts Club and two previously with the Piers Feetham Gallery. In Athens, she has had two solo shows at Gallery Argo.

After moving to the UK, Monika studied fine art at City and Guilds of London Art School, and married her tutor, Michael Buhler. Michael was a gifted and original painter, whose subjects ranged from abstracts to pop art to unidentified flying objects, and who passed away in October 2009. Their daughter, Alexandra, carries forward the artistic tradition, and within that the tradition of going for “something different.” 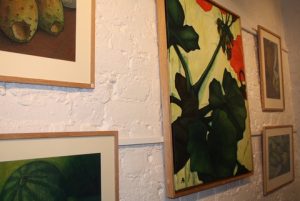 Some of Alexandra’s works including Geranium, oil on canvas

Alexandra has 29 works in the Piers Feetham show, the list reading like an agricultural catalogue: cinnamon plant, three onions, cactus fruits, tulips, tomatoes, peach and plums, beetroot and so on. Much of the produce reproduced is solid-looking, grainy and workmanlike. It has an almost architectural structure without being stolid. The objects have the richness integral to the fruits of the earth that only countries like Greece can serve up. The more one looks, the more captivating the everyday items become: who would have thought one could be spellbound by a piece called Red Onions and Courgettes. Her geraniums and other plants are superb, and will surely never wither.

Besides practising as an artist, Alexandra is a PhD student at the School of Oriental and African Studies, researching the history of the minority Zoroastrian communities in India and Iran in the early 20th century. She received a commission in connection with the exhibition The Everlasting Flame: Zoroastrianism in History and Imagination, at the SOAS Brunei Gallery in 2013, which recounted the story of the religion, starting with its spread from central Asia to pre-Islamic Iran, and its influence on Judaism, Christianity and Islam. While reading theology at Christ Church College, Oxford, she made full use of the college’s art room where she attended life drawing sessions, clay modelling workshops and printmaking classes. She has illustrated books for the author John Abecasis-Phillips. 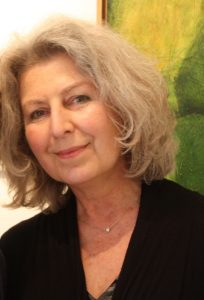 In an introduction to the current exhibition, David Buckman, author of The Dictionary of Artists in Britain since 1945, has written of mother and daughter: “Here are two closely linked artists with quite different aims, but both offering visual delights.”

Monika Veriopoulos and Alexandra Buhler: Drawings and Paintings. The exhibition is at the Piers Feetham Gallery, 475 Fulham Road, London SW6, until June 6 2015. www.piersfeethamgallery.com

Most indicators fall but more in hospital