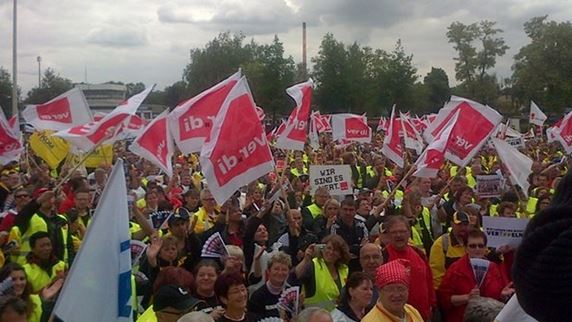 The scene outside today’s AGM

Six thousand Deutsche Post-DHL workers who put the company on trial today at its annual general meeting in Frankfurt, Germany, were buoyed up by support from DHL unions around the world.
The protesting workers, members of the ITF-affiliated ver.di union, were calling on shareholders of the postal and logistics giant to stop its plans to slash parcel workers’ wages and take away their rights.

The company plans to move up to 10, 000 parcel workers out of Deutsche Post and into new shell companies called DHL Delivery. Workers will lose as much as EUR3, 500 per year and all access to the existing collective agreement and existing works councils in Deutsche Post.

Speaking from the protest, Ingo Marowsky, ITF global head – supply chain and logistics, said: “DP-DHL is guilty of a divisive, unfair and unethical ploy to create a two-tier workplace. This dirty trick goes against everything it claims to stand for. That’s why Ver.di is fighting back, with thousands of its members holding warning strikes in the last two months – and now this landmark protest here in Germany’s financial heart.

“All of us in Frankfurt today are being backed by an overwhelming display of solidarity by DHL unions worldwide. It makes us proud to be part of it.”

Philip Jennings, general secretary of UNI Global Union, stated that UNI and the ITF are backing ver.di all the way and will not rest until this decision is reversed.