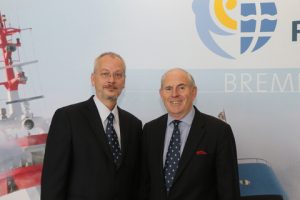 Captain Udo was elected by the IMRF’s trustees at the quadrennial meeting of the Federation held at the end of the World Maritime Rescue Congress (WMRC) in Bremerhaven which was attended by more than 250 delegates from 38 countries.  He will serve a four term and takes up his appointment immediately

On being appointed Udo Fox said: ” I want to say how deeply honoured I am to have been given the responsibility of Chairing the IMRF. It is an organisation going from strength to strength and is widely respected in the maritime search and rescue community and beyond, so I am proud to have been given this special role.

“For a small charity with a vibrant, professional secretariat it punches well above its weight and I will strive to build on its growing success so we can extend our membership reach and continue to build our profile.

Succeeding the esteemed Mr Vlasto will be a hard act to follow but the Federation rests on solid foundations and I am confident that there are many opportunities to further develop co-ordination and co-operation, which are central to our existence, within the maritime SAR family.”

He added that on that subject, he was greatly encouraged by the involvement and enthusiasm of the WMRC delegates, the quality of the presentations and the consensus on the common themes that emerged.

Udo recalled that he was co-opted to the group leading the transition from the International Lifeboat Federation (ILF) to the IMRF and was then elected a trustee in 2007 and re-elected in 2011.

“I am now part of today’s IMRF – an organisation which looks very different from the ILF.” Said Udo. He thanked outgoing Chairman Michael Vlasto and other departing trustees for their contribution in making this transformation.

In recognition of the outstanding commitment of the retiring trustees with all being inducted as Honorary Life Members of the organisations. The retiring Trustees are Brooke Archbold NZ, Hamish McDonald OBE Scotland, Captain Jaihui Song China, Rolf Westerstrom Sweden and Michael Vlasto.