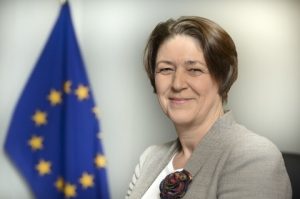 The conference gathered EU decision-makers, experts and social partners to have an intensive discussion on important social issues related to transport policy making, to underline the need of social dialogue in the various transport modes and to exchange information on best practice examples.

The conference was opened by Transport Commissioner Violetta Bulc. Commissioner Bulc underlined the importance of transport for the European society and economy and drew attention to a number of concrete questions and challenges for transport in the coming years, such as making transport a more attractive sector for youngsters and women, coping with the ageing population in transport, adapting the sector to technological innovation and the increased use of digital technologies, etc.

The Conference was broken down into three dedicated workshops, of which one workshop aimed at addressing the question how to strengthen the involvement of social partners in the EU transport Policy.

For shipping, this question was answered by the Vice Chair of the Sectoral Social Dialogue Committee for Maritime Transport, Mr. Georges Kolstidopoulos. Mr Koltisopoulos spoke on behalf of the ETF and ECSA and presented the work performed by the social partners for maritime transport over the past twenty years. He highlighted how this work had contributed to developing a transport policy in general and to improving the living and working conditions for seafarers in particular. In this respect, Mr. Koltsidopoulos referred to the two social partners’ agreements, notably on working time for seafarers and on the ILO Maritime Labour Convention, to the two joint projects on eliminating bullying and harassment for the workplace and to mapping career opportunities for seafarers willing to leave their job at sea for a job onshore. Furthermore, reference was made to the efforts of the social partners in reaching an agreement on the Commission’s proposed directive on seafarers amending a number of social-related Directives. This agreement was fully embraced by the Council and the European Parliament and is about to be formally adopted by both institutions soonest.

From the floor, acting Deputing Director General Fotis Karamitsos referred to the Sectoral Social Dialogue for Maritime Transport as an example of best practice in terms of social dialogue in the transport industry.

In her concluding remarks, Commissioner of Employment and Social Affairs Marianne Thyssen recognized the particular importance of European social dialogue in the transport sectors, underlined the contribution of social dialogue to the improvement of working conditions in the transport sector in the past and explicitly referred to the Commission’s proposal for a Directive on the inclusion of seafarers in several labour law Directives as an example of a success story.

“The EU social partners in the maritime sector played a very important role in the discussions between the co-legislators. It looks like the proposal will be adopted in the very near future now that the trialogues between the EU institutions have been successful”, said Commissioner Thyssen.

The speech of Transport Commissioner Bulc can be found here

The speech of Employment Commissioner Thyssen can be found here