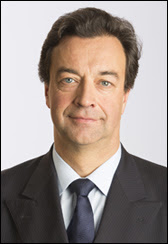 Paola Subacchi, director of international economics at the Royal Institute of International Affairs, steps down from her deputy chairman position after five years.

Before he joined SSGA in 2013, de Montpellier served as deputy head of the banking department at the Bank for International Settlements for eight years. De Montpellier’s 30 year career spans public debt management, public asset management and private sector finance at Morgan Stanley, the Belgian Ministry of Finance, European Bank for Reconstruction and Development and Credit Suisse.

Commenting on de Montpellier’s appointment, Lord Desai said: “We are pleased that Louis brings to the advisory board additional acumen, experience and enthusiasm. This signals, too, the growing role that SSGA is playing with OMFIF, as a founder member of our institution. Paola Subacchi is standing down and we would like to thank her for all her hard work.”

De Montpellier said: “I am honoured to have been appointed deputy chairman to the OMFIF Advisory Board. OMFIF plays a crucial role in promoting a better understanding between the private and public sectors on economic and financial developments as well as evolving investment standards. This further demonstrates SSGA’s commitment to sharing its knowledge and experience with official institutions in order to meet their needs and challenges.”

The Official Monetary and Financial Institutions Forum is an independent research and advisory group and a platform for confidential exchanges of views between official institutions and private sector counterparties.