Οn 11 February 2015,  the Bulk Carrier “GOODFAITH” (GT 16, 446, DWT 27, 308) grounded on the north west coast of Andros island, Greece in adverse weather conditions. All 22 crew members were rescued by Puma helicopters and by Special Forces from the shore. During the incident the vessel was on passage in ballast, from Elefsis, Greece to Odessa, Ukraine. On the same day, Tsavliris Salvage were contracted to provide salvage assistance.

The S/T “MEGAS ALEXANDROS” (6, 250 BHP, 73 TBP) was mobilized from her Piraeus station and EPE S.A. (Environmental Protection Engineering S.A.) was engaged to provide environmental protection and antipollution services. The oil recovery vessel “AEGIS I” mobilized from Lavrion, Attica and arrived at Port of Gavrion, Andros, with salvage and antipollution teams onboard.

Due to adverse weather conditions prevailing in the area, the salvage team was not able to board the casualty either by sea or by land. At the same time the S/T “MEGAS ALEXANDROS” stood by close to the casualty.

The salvage team managed to board the vessel on 15 February in order to carry out an inspection. It was reported that the engine room, the fore peak tank, and the cargo holds No 1, No 3, No 4 and No 5 were flooded, whilst cargo holds No 4, No 5 and the engine room were contaminated with fuel oil.  The vessel was wedged between rocks aft and had a 12-degree list to port.

On 21 February, the weather abated enabling the “MEGAS ALEXANDROS” and the “AEGIS I”, to proceed to the casualty’s position with a salvage team, including divers and an array of salvage equipment.

All necessary preparations were made and the pumping out of fuel oil began from the engine’s room service tank to the “AEGIS I”.

The removal of bunkers/pollutants was completed on 28 March. About 300 MT of fuel oil and 10 MT of diesel oil were pumped out. Demobilization of personnel, crafts and equipment commenced on 29 March.

On 13 May 2015, the Aframax Tanker “LADY M”, laden with about 93, 000 metric tons of low sulphur fuel oil, immobilized about 500 nautical miles south of Azores due to a fire in the main electrical panel. On 14 May the S/T “TSAVLIRIS HELLAS” was mobilized from her permanent salvage station at Ponta Delgada, Azores to the assistance of “LADY M”.

On 16 May the “TSAVLIRIS HELLAS” arrived at the scene of casualty and towage commenced towards Las Palmas later on that day. The tow arrived at the Gran Canaria area on 27 May. A skeleton team boarded the casualty by helicopter to prepare the vessel for inspection. A detailed Tsavliris Salvage Plan was approved by the Harbour Master. After all necessary Spanish Maritime Administration’s Surveyor Team inspections, the entry permission was granted by the Maritime Coordination Center.

Another view from the Lady M

On 31 May the vessel entered Spanish territorial waters, proceeded to Las Palmas port and, berthed alongside at ‘’Leon Y Castillo Maciente’’ container terminal with the assistance of four port tugs. The “LADY M” was then supplied with electricity from portable diesel driven generators provided by the Salvors.

On 1 June the vessel was shifted at “Reina Sofia” berth as well as the “TSAVLIRIS HELLAS” in order to provide stand-by and safety services. The supply of inert gas to the cargo tanks from a portable shore Inert Gas Generator (IGG) commenced together with the supply of steam to the cargo tanks heating coils by a Steam Generator in order to bring temperatures to a safe level. The heavy portable equipment was airlifted from Holland to the Canary Islands by cargo plane. The cargo was later assessed by a chemist team and found to be safe in all the circumstances and at no risk of becoming lost or damaged. Demobilization of personnel, crafts and equipment commenced on 12 June 2015.

The cutter suction dredger “Tiandao” caught fire, capsized and sank at the Port of Gizan in Saudi Arabia, end of November 2014.

On 1 December 2014, TSAVLIRIS SALVAGE were contracted by Huta Marine Works to provide technical consultancy/support including planning, surveillance and risk assessment.

After the successful refloating operation of the sunken dredger “Tiandao”, the project was finalised on 22 April 2015. 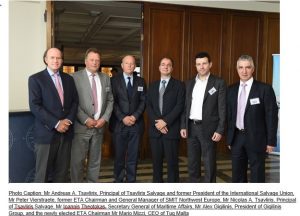 The programme included a meeting of the Supervisory Committee, the Annual General Meeting of Members, a Conference and a Social Day.

The Supervisory Committee and the Annual General Meeting of Members noted and reconfirmed with satisfaction the recent incorporation of ETA as a non-profit organisation under Belgian Statutory Law and its registration in Brussels acquiring legal personality forthwith.

Matters discussed by the Board of Directors were the successful outcome of the European Shipping Week in Brussels in March 2015 with the initiative of ECSA, to which ETA contributed actively in its capacity as member of the Steering Committee.

The members elected Mr Mario Mizzi (CEO of Tug Malta) as their new chairman in succession to Mr Peter Vierstraete (General Manager of SMIT Towage Northwest Europe) and Mr Leendert Muller (Managing Director of Multraship Towage & Salvage BV) to the position of Deputy Chairman. Both will serve on the Board of Directors for two-year terms.

The European Tugowners Association was formally established in London on 1 July 1963 and transferred to Brussels in 2002. It is one of Europe’s oldest maritime trade organisations. The Association is widely recognised as the sole representative body of European tugowners and operators striving for safe and efficient maritime transport and port services within Europe. Since 1964, Full and Associate Members gather each year, invariably in one of the European littoral countries where members operate. The first AGM of the ETA in Greece took place 50 years ago in Piraeus, in 1965, followed by the ETA in 1976 in Athens, 1982 in Corfu and 1993 in Crete.

At present, the ETA has 81 full members in 21 countries that own or operate a combined fleet of some 700 tugs in European ports/installations. Each member-country has a Representative on the Supervisory Committee, nominated by the full members of the individual countries or the respective national tugowners’ association. Nicolas A. Tsavliris is the Representative for Greece.

Messrs Hinneberg have a solid establishment going back over 60 years in the shipbroking and shipbuilding business. The company was founded by Walter J. Hinneberg in the 50’s and has since developed a significant network.  They enjoy an excellent reputation in the German and international shipping market.

Their core business is newbuildings and  sale-and-purchase, however through their considerable general experience in shipping they are well placed to handle salvage, towage and maritime services.  Their clients extend beyond the German KG investors, to household liner shipping and ship management companies.

Tsavliris Salvage is one of the most active Emergency Response Contractors for maritime casualties. It provides a round-the-clock service on a worldwide basis, making it the intersection of high quality and added value.

The Group’s international activities embrace every service relating to marine salvage and towage, extending to complex wreck removals. Tsavliris Salvage has own tugs on permanent stations at strategic locations throughout the world and is able to mobilize a global network of expert salvage professionals and specialized portable equipment within hours of activation. 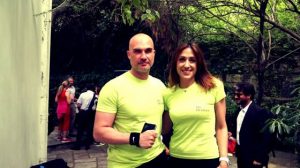 Tsavliris Salvage Group took part in the Charity Rowing Competition held by Hill Dickinson on 4 June at the picturesque Microlimano in Kastella and came second winning the silver medal. Tsavliris Super Team, Mrs Christine Iliaki and Mr Megaklis Efthimiopoulos, together with Evdemon Team, competed against ten other teams with two boats competing against each other in each “heat”. The event was followed by a cocktail reception.

A fair & free platform for Maritime Businesses by Sailors Club