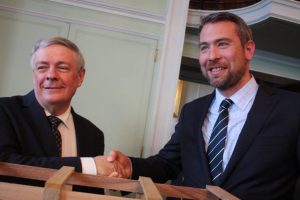 Scores of personalities from throughout the shipping and insurance sectors packed into Trinity House on a warm July evening to say a formal farewell to Karl Lumbers, who is retiring as manager of the loss prevention and ship inspection departments of the UK P&I Club.

Colleagues, ship operators and managers, service providers, competitors and other leading industry figures both active and retired heaped praise on Mr Lumbers, who has long been known for his principled and zealous approach to marine safety and for his ability to put across his messages in powerful presentations enlivened with touches of humour. 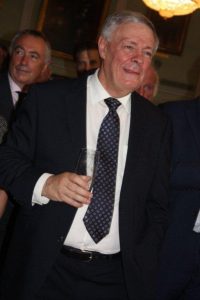 A master mariner who has some 42 years of experience in the marine sector, Mr Lumbers joined Thomas Miller 29 years ago after working with P&O and then London marine consultants Cleghorn Wilton and Associates. Thomas Miller manages the UK Club, which covers more than 225m gt of mutual owned and chartered tonnage, and other important mutual insurers,

He is succeeded as director of loss prevention and ship inspections by Stuart Edmonston, who joined the Club in 2014 as loss prevention deputy director, after eight years at law firm Holman Fenwick Willan as a marine manager and casualty investigator. Mr Edmonston too is a master mariner and has worked mainly on tankers, and on cruise ships, offshore supply and floating production storage and offloading vessels.

Hugo Wynn-Williams, chairman of Thomas Miller Holdings, said: “Karl has been a stalwart of the Club since joining in 1986 and the architect of our industry-leading loss prevention department. We wish Karl a long, happy and well deserved retirement.”

Nigel Carden,  deputy chairman of Thomas Miller P&I Ltd and who has overall responsibility for loss prevention,  said he agreed with a description that had been given of Mr Lumbers as a “brilliant communicator” in the maritime world.  Nor was the loss prevention director short of words within the office: over the years he had sent Mr Carden a total of 6, 240 messages… 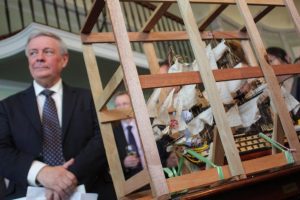 Mr Lumbers is presented with custom-made model of HMS Victory.

Mr Carden had turned up the file with Thomas Miller’s 1986 letter offering Mr Lumbers a position as a trainee claims handler… including luncheon vouchers of 75p a week.

Mr Lumbers had built up the department to include ship inspection staff comprising six people who were ex-masters or chief engineers. “Amazingly, he was a nervous speaker in the beginning, but once he started making his claims analyses he showed strong presentation skills, ” said Mr Carden. “He accepted every invitation to speak [about loss prevention] in the next decade. In return, he developed fantastic industry support for the projects he was launching.

“He always had a nice turn of phrase appreciated by journalists. ‘Rusty ships’ became ‘rusty people, ’ the sort of thing that was a joy to the sub-editor.” Mr Lumbers was a creative thinker – “he teases, he picks up ideas endlessly.”

Hugo Wynn-Williams, chairman of Thomas Miller, on right of picture, and guests at the event.

Mr Lumbers had been sincere in his approach to the task “and believes it makes a difference for the safety of shipping and to the business of his clients.”

Chris Foster of Burgoynes, an international partnership specialising in investigating fires, explosions and other major incidents, praised Mr Lumbers for the “infectious enthusiasm” he had brought to steering projects initiated by the Club’s Carefully to Carry Committee, which he chaired.  The Committee works to analyse and draw attention to voyage problems such as hold washing, cargo securing, and ventilation.

Dr Foster presented Mr Lumbers with a custom-made wooden model of HMS Victory, the base of which included some timber from the original ship.

In his response which received thunderous applause, Mr Lumbers said that he had invited every one of the guests individually as a thank-you for their support and friendship over the years. The largest group of people present were the consultants who had been used by the Club and they were “some of the best consultants in the world.” Then there were representatives of industry associations including Intertanko, Intercargo and several more. Notable people were there from “the competition” (other P&I clubs) about which he said: “we fight, I can tell you, this is no cartel! It has been good competition.” He paid tribute to the insurance brokers, and to the Press (“I have never, touch wood, been misquoted”).  He had warm words for Mr Wynn-Williams and the staff at Thomas Miller: “I have always been backed up, and that was nice to know.” His department had “worked a lot more closely with the underwriters than used to be the case.” He appreciated the skills of the IT people: “The systems we use are always backed up, and we have designed most of our software ourselves.” 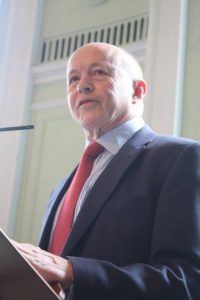 He did admit that there had been tensions when it was found that some of the ships inspected in the late 1980s and early 1990s were “dreadful.”

He said that Thomas Miller as a firm attracted great loyalty.  “I have worked there for just 29 years. A lot of the people in this room have been with Millers longer, some for 40 years or so.” He made particular mention of the support from his wife Anne and his “wonderful family.”

Mr Lumbers began his working life with 13 years at sea mainly with P&O on refrigerated cargoships, having started with the New Zealand Shipping Company which was taken over by the conglomerate. He had a spell operating jetfoils from the Thames to Ostend; and time ashore as a marine consultant. From joining Thomas Miller in one of the claims syndicates, he took over the loss prevention role and responsibility for the quality of the Club’s tonnage in 1992, being promoted to a director.

All present congratulated Mr Edmonston on his new role, including Mr Wynn-Williams, who said: “We are delighted to have found someone of Stuart’s credentials and background to succeed Karl as our loss prevention director.” Mr Edmonston said he had  metaphorically “big shoes to fill” in succeeding Mr Lumbers. “I am excited to be taking on this role and to be given the opportunity to build on the tremendous work done by Karl.”