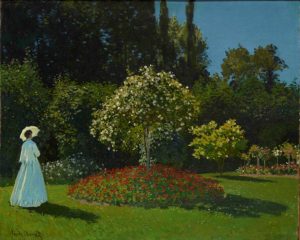 Have you planted the tomatoes yet?  How are the sweet peas doing? Exchanges such as these with his friends were commonplace for Wassily Kandinsky, one of the 20th century’s greatest avant-garde artists.

While Claude Monet is famed as the great painter/gardener, a distinguished array of his contemporaries and successors propagated their skills both at the easel and with their spading forks and hoes.

Such fertile soil will be tilled by the exhibition Painting the Modern Garden: Monet to Matisse, highlighting the role of gardens in the paintings of Monet and many other colossi, starting in October 2015 at the Cleveland Museum of Art, Ohio, followed from the end of January 2016 by the Royal Academy of Arts in London.

For a show that will be both popular and scholarly, curators have dug up remarkable research into the importance of gardens and gardening in the lives of modern artists. It will not specifically be a Monet exhibition – although there will be 35 of his works among the 120 on show – and not as such an Impressionist exhibition, although Monet is considered the father of French Impressionism. Nor will it be an exhibition about still life: it will celebrate the concept of the garden and gardening. For London, it will be a summer delight to brighten the grey days of winter.

Alongside the Monet treasures will be unfamiliar masterpieces from masters including Kandinsky, Paul Klee, Emil Nolde and Gustav Klimt.

Kandinsky (1866–1944) became a pioneer of pure abstraction in painting, but this was perhaps inspired by his acquaintance with Monet’s output. He was to have been a lawyer, but in 1896 after visiting the previous year in his native Moscow an exhibition of French Impressionists, especially Monet’s Haystacks at Giverny,  he made the fateful step of moving to Munich to study art.

Kandinsky and his wife settled in the small town of Murnau at the foot of the Alps, where his fascination with landscapes and gardening developed. An example to be shown is from 1910 and entitled Murnau The Garden II (Merzbacher Kunststiftung)

This “rich and exciting exhibition, ” in the words of Ann Dumas (Royal Academy curator who for the exhibition is collaborating with Dr William Robinson of the Cleveland gallery), will occupy most of the main galleries at the Royal Academy. The curators will show how the cultivated garden, a phenomenon of bourgeois society from the mid-19th century, influenced the development of modernism in art.

In a grand manner, Monet (1840-1926) cultivated gardens wherever he lived, and the Impressionist manner along with them. “I perhaps owe it to flowers, ” he wrote, “that I became a painter.” He was convinced that he was a better gardener than a painter.

The world is familiar with his canvases not merely because of their qualities, but because he made repeated studies of the same motifs, according to changing seasons and light. Ms Dumas sees him as a visionary, whose works look forward to the abstract movements.

The Royal Academy says that from Monet’s early years a symbiotic relationship developed between his activities as a horticulturist and his paintings of gardens. At Sainte-Adresse, near Le Havre, he was taught open air painting on the beach by Eugène Boudin, his works at that time including maritime scenes.

Wherever he lived, even in a rented house, he always created a welcoming garden, and among his favourite flowers were dahlias. In 1883 Monet moved to Giverny, 50 miles outside Paris, buying a house near a railway line and river, and he was to live there until he died. He established his beloved lily ponds, which from 1889 became the subject of numerous paintings, some with that Japanese bridge that helps make them so memorable. He was always closely involved with the layout for his estate, sending constant instructions to his gardeners.

He had a greenhouse built, a feature that for domestic gardens was a fashionable novelty. (His friend Gustave Caillebotte (1848 –1894) included in a painting that will be on show a large greenhouse he used for the cultivation of orchids. Caillebotte corresponded with Monet on several horticultural topics).

Monet acquired land with a water meadow on the other side of the rail track from his home, obtaining planning permission to divert the course of the river. The 1893 extension brought him into conflict with local farmers,  suspicious of his plans for still more aquatic plants – some species were exotic imports from South America and Egypt, fairly new to Western Europe. In any case, local villagers viewed him as an outsider.

During World War I, in which his son Michel served at the front and his friend Georges Clemenceau became Prime Minister of France in 1917, Monet painted a series of weeping willows as homage to fallen soldiers.  From Giverny, he could hear the shooting, and trains carrying troops trundled along the line. He knew that not far away, people were suffering and dying, and considered that painting was a way of making a spiritual contribution of respect. After the war, Monet presented several of his works to the French nation as a gesture of victory and peace.

Among water lily paintings in the exhibition will be the monumental Agapanthus Triptych of 1916 – 1919 (from Nelson-Atkins Museum of Art, Kansas City; Cleveland Museum of Art; and Saint Louis Art Museum), which will be seen for the first time in the UK. Monet’s Lady in the Garden of 1867 (from the State Hermitage Museum, St Petersburg) will be shown, and a nice touch will be the addition of Auguste Renoir’s picture of Monet painting in an earlier garden, at Argenteuil.

Artefacts including some of Monet’s botany books and horticultural journals, and receipts for purchases of plants will be on show. “We have a lot of fascinating documentary material of artists in their garden, ” said Ms Dumas.

Continuing the French connection, the exhibition will feature rarely exhibited large panels which give a tapestry effect, by Édouard Vuillard (1868-1940), who at the beginning of the 20th century painted the garden of a villa on the Normandy coast. Vuillard often painted for interiors: he completed a series of vertical panels,  Public Gardens,  in 1894 for a private home. 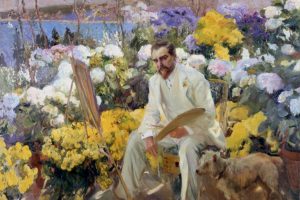 Louis Comfort Tiffany, 1911. Oil on canvas. By Joaquin Sorolla. On loan from Hispanic Society of America, New York, which has photo copyright.

Adherents to various artistic movements – Symbolists, Fauves, and German Expressionists – took to their palettes the notion of gardens as a means of exploring abstract colour theory and decorative design. The Royal Academy says that Monet’s representations of his garden at Giverny anticipate artistic movements such as American Abstract Expressionism.

One question that could be answered by the exhibition – which will set out to frame the paintings in the context of broad artistic movements, and social and political events – is why it seems that male painters dominated this realm of garden depiction.

Global investments group BNY Mellon, which has $1.7trn in assets under management, is sponsoring the exhibition. Michael Cole-Fontayn, chairman of Europe, Middle East and Africa at the company, said: “Supporting the arts is deeply stitched into the fabric of BNY Mellon’s heritage. We firmly believe cultural places and events contribute to making our communities vibrant, welcoming and more positive places to live and work.”