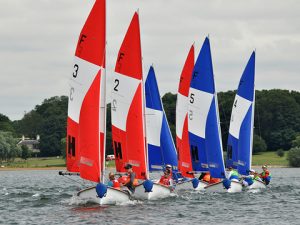 Monday 20 July 2015 – Issued on behalf of ISAF – On day one of the 2015 ISAF Team Racing World Championship, it was the teams of Great Britain and USA who were fighting it out at the top of the leaderboard at Rutland Waters.

With the wind picking up throughout the day, a total of 108 races were completed to make a significant dent in the first round-robin stage, and all the teams have been enjoying the great sailing conditions.

Three teams sit at the top with a win percentage of 92%, the West Kirby Hawks and the Royal Forth Hoosiers of Great Britain and Ladies & Gentleman of the USA.

The West Kirby Hawks are current World Champions, while The Royal Forth Hoosiers are the UK National Champions, so both crews are full of confidence coming into the regatta and seem to be taking that confidence and putting it to good use.

Following close behind are the third British team, BYOB, and the two USA teams, Team Shred and Days of Thunder. The three teams are tied for fourth position with a win percentage of 83%. All the teams will not only be looking to move up in the standings when the regatta continues on Tuesday, but also move ahead of their compatriots for bragging rights.

The nearest teams to the two dominating nations are Bermuda and Ireland who are tied together on a 50% win percentage for seventh position.

Watching the action and showing support, the teams were lucky enough to meet Her Royal Highness The Princess Royal who was in attendance to mark the 20th anniversary of the founding of Rutland Sailability, which provides sailing for disabled people of all ages, in her capacity as Patron of the RYA Foundation.

Event director David Wilkins said, “We’ve really had a fantastic day here. The racing has been very close between the top half dozen teams.

“The Royal visit was very enjoyable. Her Royal Highness The Princess Royal spent over an hour out on a boat.

“She was very knowledgeable, having done a lot of sailing, and was fascinated with the team racing and picked up the format very quickly.”

The sailing continues on Tuesday at Rutland as the round-robin stages are completed.

Like A Bargain Book? Check Out Fathom’s Summer Special Deals