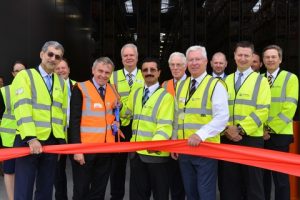 London, UK, 20th July 2015:– Robert Goodwill, Minister for Transport, has visited DP World London Gateway to mark the official opening of the first distribution centre at what is set to become the largest logistics hub in the UK.

Mr Goodwill was joined by DP World Chairman, His Excellency Sultan Ahmed Bin Sulayem, to formalise the opening of the centre during a ribbon cutting ceremony.

The first phase of this high tech unit, which comprises 16, 800m² (180, 000 sq ft) of distribution and logistics space and 2, 400m² (25, 000 sq ft) of office space, has been finished to BREEAM “very good” standard, the world’s foremost environmental assessment method and rating system for buildings.

Based on market demand, DP World is now planning to increase the size of the centre to 36, 000m².

In partnership with DP World, the centre is being operated by Import Services Limited, a leading UK logistics services provider, offering a variety of activities on a pay-as-you-go basis.

Robert Goodwill MP, Parliamentary Under Secretary of State for Transport,  said: “I am delighted to have been able to open the London Gateway Logistics Centre, which is the next step in this ground-breaking development on the north-bank of the River Thames which is breath-taking in its size, scale and attention to detail.

“DP World London Gateway is an excellent example of the benefits inward investment brings to UK infrastructure and the economy.

“Any project that gives the country an edge, whether it be generating supply chain efficiency or leading the way in environmental sustainability, should be commended.”

HE Sultan Ahmed Bin Sulayem, Chairman, DP World, said: “Our new DP World London Gateway Logistics Centre is the next landmark in this unique development for the UK and I am delighted to be here today with the Minister for Transport.

“DP World London Gateway is transforming UK supply chains and this new logistics hub has been constructed to the highest quality and environmental standards. It is the perfect example of how retailers and cargo owners can achieve cost savings by positioning themselves strategically, here, in the right location for trade.

“Our team has worked hard to deliver the first building at the London Gateway Logistics Park. I would like to congratulate them on producing a world-class edifice, fit for the challenges of 21st Century logistics.

“Our next building, in joint venture with Prologis, is progressing well and we expect it to be ready in September.

John Eynon, Managing Director, Import Services Limited, said: “In just two months of operations at the new London Gateway Logistics Centre, the strong demand for our services means we are already approaching capacity of phase one and now seeking to accelerate development of additional warehousing space at London Gateway.

“Services, such as cross-docking, high volume order processing, pre-retailing, distribution to the Majors, Multiples, Indies and direct to consumer, are all in demand at this unique location, which combines the supply chain benefits gained from both port-centric and market-centric logistics.”

The DP World London Gateway Logistics Park is located adjacent to the UK’s newest deep-sea terminal, with its excellent location, on the door-step of the largest consumer market in Western Europe.

The‎ DP World London Gateway Logistics Park is set to become one of the largest of its kind in Europe.

The port’s location, with its superior operational systems and service, ensure ships load and unload as fast as possible, making London Gateway a world class asset for the UK.

Heppner strengthens its European network and diversifies its...