Work gets underway on South Africa’s first Offshore Supply Base 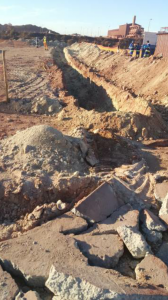 SALDANHA, 22 July 2015 – Construction work has commenced on Transnet National Ports Authority’s new Off-Shore Supply Base (OSSB) at the Port of Saldanha – one of three priority projects earmarked for the port under the South African government’s Operation Phakisa initiative.

The facility will be the country’s first dedicated and customised facility supporting offshore oil and gas activities and is expected to be commissioned by September 2016. It will serve vessels engaged in supporting offshore exploration and production activities along the West and East coasts of Africa, and calling at South African ports for support and logistics services.

“Construction work will entail infilling the gap of about 80 metres between the existing two quays, refurbishing one portion of the quay and lengthening the quay by 20 metres on either side to create a total quay length of 294 metres. Minor dredging works will provide a depth of 8 metres alongside the overall length of the quay, ” said Roux.

Roux said the OSSB would provide a base for receiving equipment and waste from offshore exploration and production activities and providing facilities for loading and shipping of equipment, stores, goods, bunkers and drilling fluids.

He said TNPA had appointed a Transaction Advisor to provide a report on best practice, a market analysis and different operating models for consideration.

“The Transaction Advisor will assist TNPA with the finalisation of Request for Proposal documentation for the appointment of an operator for the OSSB. This operator will be responsible for providing infrastructure such as warehousing, workshops, offices, canteen and rest room facilities, as well as equipment such as cranes and other rubber tyred equipment to operate the facility.”

TNPA’s three Operation Phakisa projects to develop Saldanha as a specialist hub for the oil and gas sector are: the OSSB; an rig repair facility at berth 205, with a length of 380m and a depth of 21m to comfortably accommodate two rigs at a time. A new finger jetty in the vicinity of the port’s Mossgas quay will be 500m long with a depth of 8, 5m and 12m pockets to accommodate floating docks for vessel building, repairs and maintenance.

Milestones to date include completion of pre-feasibility work such as geotechnical and seismic studies, as well as preliminary designs for the establishment of the rig repair facility at berth 205. Similar studies would be completed by the end of September 2015 for the finger jetty. An Environmental Assessment Practitioner will be appointed to perform baseline and specialist environmental studies by mid July 2015.

TNPA intends to follow a build operate and transfer (BOT) model in establishing these facilities.In terms of the expanded Mossgas finger jetty and the oil rig repair facility at berth 205, the successful bidder will be responsible for dredging works as well as the wet and dry infrastructure development.

All three projects would complement the 330 ha Saldanha Bay IDZ which was designated in 2013 and which is expected to be constructed from August 2015. The Saldanha IDZ will allow operators to import equipment and goods destined for exploration and production activities off-shore in a similar manner as a “free port”.

Roux said that while it was a difficult time in the oil industry, there was still an appetite for the development of a dedicated facility in Saldanha for the oil and gas sector.

“The current economic climate in the oil and gas market may not be conducive to embarking on new exploration projects, but one has to be mindful that the majority of existing offshore production remains operational. Demand for support of these operations will continue and the lull in exploration activities may in fact provide an opportunity to perform repairs and maintenance to exploration vessels and equipment, ” he said.

The port authority expects to have all three projects completed within two to three years, working alongside strategic partners including the South African government, the Southern African Oil and Gas Alliance (SAOGA) and the Saldanha Bay IDZ Licencing Company.