CMB’s executive committee has discussed the preliminary results recorded for the second quarter and those for the first half of 2015. 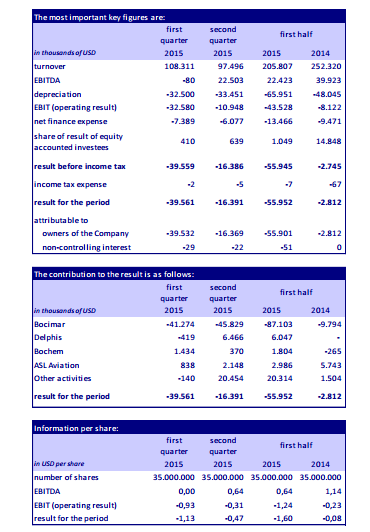 All figures mentioned in this press release have been prepared under IFRS (International Financial Reporting Standards) and have not been reviewed by the statutory auditor.

Despite a number of negative indicators, those dry bulk markets have recently strengthened. In the Capesize and Panamax segments this strengthening has been supported by a lack of available ships, especially in the Atlantic, and has also undoubtedly been assisted by a significant increase in the pace of demolition during the last six months.

The smaller Supramax and Handysize segments have also seen better earnings in the last weeks as a result of record export volumes of soy beans and grains out of South America. Bocimar, however, remains of the opinion that a better balance between supply and demand will only be achieved in the longer term following a contraction on the supply side through scrapping, slippage and a scaling back of ordering.

Bocimar’s average earnings for the second quarter and for the first half of the year can be summarised as follows:

The acquisition of the Delphis vessels was finalised in the course of the second quarter. As a reminder, it concerns the acquisition of a fleet of 14 containerships of which 7 are fully owned and 7 owned in joint venture. Simultaneously with the acquisition of the Delphis fleet CMB also acquired the stake of Delphis’s partner in the 7 joint venture vessels. In the consolidated accounts for the first semester Delphis has been included as from 1 January and contributes USD 6.047.000 to the consolidated result for the first half of the year. This contribution takes into account the one-off impact of a partial debt waiver amounting to USD 3.622.000, an exchange rate gain of USD 1.217.000 on the revaluation of debt expressed in EUR andnon-recurring income of USD 1.600.000 resulting from the take-over of the share of Delphis’s partner in the 7 joint venture vessels.

The joint venture Delphis Hunter that CMB – together with a private equity partner – established earlier this year has further expanded its fleet and currently owns 8 vessels. As communicated earlier, the joint venture has a focus on midsize container vessels (3.000 to 7.000 TEU).

The Group has a minority stake of 20% in the joint venture but also performs its commercial and administrative management. In the creation of this joint venture, the Group was advised by DNB Markets and RMK Capital.

Since the beginning of the year, the time charter markets for container vessels have seen substantial improvement.

In the course of the second quarter CMB exercised its option to acquire a further two newbuilding container vessels from the Korean yard Hanjin Heavy Industries and Construction (HHIC). It concerns two sister vessels to the two units that CMB ordered in December 2014. The vessels, which are scheduled for delivery in the course of September and November of 2016, have a capacity of 2000 TEU and are type 1A ice classed.

Bochem, that manages the chemical tankers of the Group contributes USD 1.804.000 (2014: USD -265.000). Freight rates in this segment have remained very robust. This is partially thanks to the halving of bunker prices on the one hand and the reduced competition of product tankers on the other.

In total, the Group operates 6 chemical carriers that are chartered in on long term charter (3 vessels of 19.000 dwt and 3 of 33.000 dwt). All vessels are operated in the Hansa Tankers Pool. In addition the Group is involved in a 50/50 joint venture for the construction in Japan of three 20.000 dwt chemical carriers. Delivery of the first unit is scheduled to take place in the month of August.

ASL Aviation contributes USD 2.986.000 (2014: USD 5.743.000) to the consolidated result for the first semester. This contribution is fully in line with expectations. The decrease in contribution as compared to last year is due to the reduced contribution of the leasing activities following the disposal of aircraft in previous years. ASL is a joint venture between CMB – 51% – and 3P Air Freighters (a private equity fund managed by Petercam) – 49%.

The Other activities contribute USD 20.314.000 (2014: USD 1.504.000) to the consolidated result for the first six months of 2015. This contribution is to a large extent due to the capital gain of nearly USD 21 million realised on the sale of the Group’s 29% participating interest in Anglo Eastern Management Group.

Current Account and Balance of Travel Services in Greece – May 2015