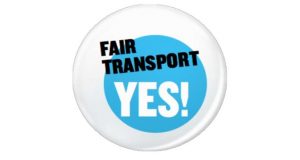 A group of trade unionists sponsored by the ETF – the ITF’s European arm – submitted a formal request to the European Commission on 13 July to launch a European Citizens’ Initiative (ECI) called Fair Transport Europe.

Under the Lisbon Treaty, EU citizens can launch an ECI calling on the Commission to act on specific issues of its competence. The rules dictate that citizens then need to collect one million signatures (online and print) in at least seven member states within one year.

The group is headed by ETF president Lars Lindgren and other members of the ETF management committee. Their request calls on the Commission ‘to ensure fair competition in the different transport modes and to guarantee equal treatment of workers (in respect of the principle of equal pay and working conditions), independently of the country of origin’.

The campaigners want the EC to act to put an end to the increase in abuses of workers’ rights, non-compliance with existing legislation, and the loopholes in the laws which apply to the transport industry.

The Commission now has two months to accept or reject the group’s request. If successful, the group will launch the Fair Transport Europe ECI campaign via a website, with promotion through social, broadcast and print media, to win the required signatures. Achieving this should make the Commission organise a hearing on the issues and eventually take formal action.

ETF general secretary Eduardo Chagas said: “If our request is approved it will be a major challenge for the ETF and its affiliates. It will be our attempt to make policy makers take the necessary actions to prevent the spread of social dumping and unfair practices by transport companies across Europe.”

The campaign website will be launched in early September, when the Commission is expected to reply to the group’s request. A positive response will see the formal campaign launch on 7 October, the ITUC (International Trade Union Confederation) World Day for Decent Work.