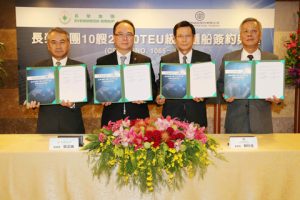 August 10, 2015 – Evergreen Group today signed an agreement with CSBC Corporation, Taiwan to build ten 2, 800 TEU class B-type vessels. Witnessed by Evergreen Group’s Second Vice Group Chairman Mr. Bronson Hsieh, the contracts were signed by EMC Chairman Mr. Anchor Chang and CSBC Chairman Mr. Sun-Quae Lai. The first ship is planned to be delivered during the second half of 2017 with the completion of the series due by the first half of 2018. The vessels are planned to be deployed in the intra-Asia trade.

Mr. Bronson Hsieh said, “After the negotiations of Regional Comprehensive Economic Partnership (RCEP) are concluded, the ASEAN countries, Australia, China, India, Japan, South Korea and New Zealand are expected to remove trade barriers, enhancing bilateral trades and thereby boosting  regional cargo growth.  Our decision to invest in these newbuildings is aimed at providing for the growth potential brought about by this free trade development.”

Evergreen’s B-type vessels will be 211 meters in length,  32.8 meters wide, and havea design draft of 10 meters with a capacity of about 2, 800 TEU.  The ships are designed to load 13 rows of containers on deck, which is within the span of existing gantry cranes in the major ports of intra-Asian trade.    The hull design of the vessels is wider in comparison to ships of a similar capacity. Such design enables the ships to navigate in shallower ports encountered in the intra-Asia trade and to enhance their cargo carrying capability.

In line with the stringent eco-friendly criteria that Evergreen has imposed on its own operation, the ships will be equipped with CSBC’s innovative Sea-Sword Bow (SSB) technology. This energy-saving device enables the ships to maintain optimumperformance in various navigational conditions and to reduce fuel consumption by around 10% compared to traditional bow designs.

The ships are also to be equipped with an electronic-controlled fuel injection engine, which meets the IMO Tier II standards for NOx emission and can reduce theemissions by around 20%. In line with IMO’s requirements of Energy Efficiency Design Index  (EEDI), the ships can cruise at a speeds up to 21.8 knots, enhancing their on-time performance and competitiveness.

To provide shippers with superior transport service, Evergreen is committed to innovative planning and adopts the most advanced shipbuilding technologies to introduce more fuel-efficient and eco-friendly ships.  The programme will rejuvenate its operating fleet thereby enhancing the quality of service offered to customers and reinforcing the line’s competitiveness in the marketplace.