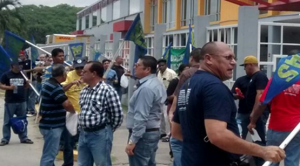 11 August 2015 – On Friday a demonstration led by the ITF-affiliated SIELAS union (Sindicato Nacional de Trabajadores de la Industria de la Aviación Civil y Similares) was held outside DHL’s offices in Panama City. The protestors, joined by an international ITF delegation of DHL union leaders, denounced the company’s anti-union actions, and called for respect for trade union rights and the lifting of a six-month suspension of negotiations on a collective agreement.

Previously, SIELAS had submitted a statement of demands to the ministry of labour covering some 123 clauses that would benefit more than 240 workers at DHL. It was accepted and negotiations began. However, in January 2015, the country’s supreme court accepted an appeal by DHL that suspended negotiations on the grounds that the union lacked a connection with the work of DHL personnel. SIELAS filed a counter claim that showed an authentic connection exists because of DHL’s air operations.

ITF affiliates from Argentina, Chile, Colombia and Venezuela joined the demonstration called by SIELAS, in order to express their support for DHL workers in Panama, to demand that the company resumes negotiations to deal with the remaining 11 clauses of the collective contract, and for adherence to ILO Conventions 87 and 98 on freedom of association and the right to negotiate collective agreements – both of which have been ratified by the Panamanian government.

Antonio Rodriguez Fritz, ITF Americas regional secretary, commented: “DHL workers want their rights respected. It doesn’t make sense that a company should want to decide which union represents a workforce, because that right belongs with the workers themselves. We call on DHL Panama to sit down in good faith and finalise the bargaining agreement  negotiations and, together with SIELAS, establish working conditions of dignity and security in line with the image that this multinational company wants to sell to its customers.”

DHL is one of the global delivery multinationals targeted by the ITF to give its workers across the world a voice to demand the social and employment rights they deserve – find out more about ITF supply chain and logistics.
Subscribe to the

DHL workers’ blog to keep up to date with developments in the DHL campaign.

What happens if a hacker tries to attack your ship’s onboard system?