CMID inspector scheme reaches a milestone – and so does CMID 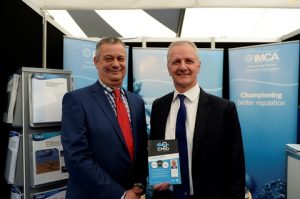 The CMID (Common Marine Inspection Document) Vessel Inspector Scheme has reached a milestone with the hundredth Vessel Inspector application having been received. The Inspectors accredited so far are based in over 20 countries, with both the International Marine Contractors Association (IMCA) and the International Institute of Marine Surveying (IIMS) actively promoting the scheme globally.  IMCA has also announced that CMID Version 9 will go live on 7 September.

“Reaching our ‘century’ in a matter of months since the scheme was launched is indeed a splendid milestone. The Inspectors scheme is being delivered by IMCA, the IIMS and its subsidiary MSA, and will radically alter the vessel inspection expectations of all stakeholders, ” said IMCA Technical Adviser, Chris Baldwin. “The Accredited vessel Inspector (AVI) card is set to become the industry standard symbol of quality for CMID reports.

“There are three parts to achieving accreditation status and maintaining it over a five year period. The first step is for professional Inspectors to make their application; then within a two-year period, they have to attend a one day CMID Accreditation Course’; and the third step is to maintain continuing professional development (CPD) by using evidence-based skill development methods such as keeping a logbook, attending CMID workshops, and completing CMID reports annually.

CMID Version 9 about to go live
“I am delighted to add that the wait for CMID Version 9 and the accompanying App is very nearly over. CMID Version 9 will ‘go live’ on Monday 7 September which will involve a whole new version of the e-CMID software too. From this date the new question set including the re-introduction of vessel type supplements, will be available. The new system will of course ‘recognise’ CMID reports completed using version 8.”

The e-CMID database system will undergo a short period of maintenance on Friday 4 September between 10:00 and 13:00(GMT+1) during which time it will not be available to users. This is to enable the software to be transferred from the test database so that it will be ready for release the following Monday. The App for Android and Apple Tablets is expected to be launched in October after full testing.

Course documentation and dates
New and extensive documentation has been produced for the first round of Accreditation Courses which is designed not to train already competent inspectors, but to provide a ‘corporate standard’ based on a level of performance expected by both IMCA and IIMS for the cadre of CMID Vessel Inspectors.

The Accreditation Course has been developed around an Instructional Specification agreed by both organisations. It will include guidance on international standards, regulations and proprietary information which will help AVIs in their role as independent observers, as well as information on the new version of CMID and the changes to the e-CMID database.

Chris Baldwin added: “Our intent is that Inspectors will gain value from the course and we will undertake to continuously improve the relevance and thus value added.”

Mike Schwarz, IIMS CEO said: “It is pleasing to have had our first century of accreditation applications relatively swiftly”.

He continued: “Perhaps unsurprisingly, given this is a global scheme, the geographical split of applicants is worldwide. But we have seen strong interest in particular from UK, Singapore, Malaysia, Australasia, USA and Scandinavia seeking accreditation”.

Dates of the one day courses
Courses are being held in:

Background to CMID
The Common Marine Inspection Document (CMID) provides a standard format for inspection of offshore vessels, including large ships right down to smaller workboats.

The purpose of this process is to provide a structure for the audit, or inspection of commercial vessels used in the offshore industry, conducted by vessel inspectors working on behalf of owners or clients. Contrary to some misconceptions, the aim of the CMID system (which includes MISW) is not to assess a vessel’s suitably for a task or contract, but to provide three measures of vessel safety and environmental assurance; the safety of personnel; the protection of the environment; and to visually assess the internal integrity of the vessel’s hull (watertight integrity). A CMID inspection should be planned and undertaken in liaison with the vessel owner and should be undertaken by a competent and accredited CMID vessel inspector.

Vessel charterers and clients may consider the inspection report before commissioning any further inspections. As a ‘living’ document, the CMID may be kept and updated onboard a vessel, thus reducing the time involved in an audit.

The CMID is regularly reviewed and updated in the light of regulatory and technical developments. A major review of the CMID has been undertaken in 2015 by a cross-industry workgroup with input provided by contractors (vessel operators), charterers, consultants and other interested parties resulting in the imminent release of issue 9.