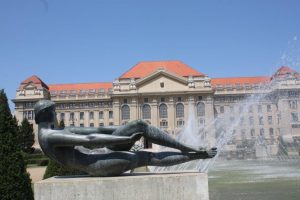 Why learn Hungarian, a language that has only 13m native speakers and presents a range of initial difficulties?

Except for a few borrowed words, the language is unrelated to Latin, Germanic, Slavic and Greek, so getting acquainted with the tongue of the Magyars requires for most people a rethink of basic concepts of vocabulary and grammar.

Help is at hand, though, as there are excellent and experienced teachers about. Every July and August some of the top tutors lead courses on language and culture at the renowned Debrecen University Summer School. In 2015, people from 41 countries found their way to these courses. 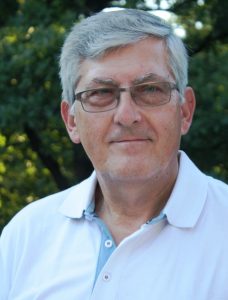 Debrecen Summer School offers courses of two to four weeks at the elegant main campus of Debrecen University and uses many of the university’s facilities, although strictly speaking the school is independent.  Debrecen in eastern Hungary has a population of 200, 000, which makes it Hungary’s largest city after Budapest.

There are many and varied reasons for students of all ages and of many countries to take up the language, asDr Péter Szaffkó,  director of Debrecen Summer School and associate professor of the Institute of English and American Studies (Angol-Amerikai Intézet) at the University, explained.

One is Hungarian roots. There are people who grew up in a different country and are aware of their background – some already speak a little Hungarian, some do not. Some yearn “to see where my grandparents lived, ” for instance. “That accounts for quite a substantial amount of people who come here during the summer courses, ” said Dr Szaffkó. 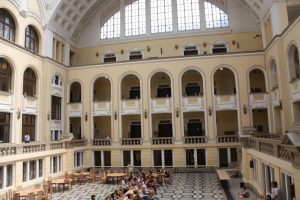 The elegant atrium of the university.

The Summer School was inaugurated in 1927 as a place of instruction and comforting point of reference for Hungarians who found themselves on the other side of the border after the country was deprived, under the Treaty of Trianon of 1920 of two-thirds of its territory, half of its total population and one third of its ethnic Hungarian population. The pact, which led to as much bitterness among Hungarians as did the vindictive Versailles Treaty among Germans, punished the then Kingdom of Hungary for being on the losing side against the Allies in World War I.

The Kingdom of Romania gained Transylvania. Czechoslovakia, and the Kingdom of Serbs, Croats and Slovenes were allocated large slices of formerly Hungarian territory. Hungary forfeited much infrastructure and was cut off from what had been its main Adriatic seaport of Fiume, now known as Rijeka in Croatia. Before the Great War, Fiume had been Europe’s 10th busiest cargo port. 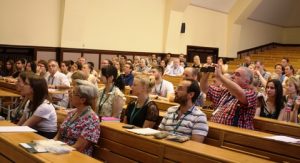 Students and tutors at the summer welcome briefing.

It is hard to imagine now, but the Austro-Hungarian navy with its Hungarian gunners ran a sizeable fleet to defend the Adriatic coast, from its home port of Pola (now Pula), and bases in Trieste and Cattaro (now Kotor, Montenegro), with a naval academy in Fiume. Archduke Franz Ferdinand, whose assassination in Sarajevo was the precursor of the global conflict, had been a keen supporter of the navy. All this is now part of another era, if not another universe, but underlines how the role of Hungary plays out far beyond its current frontiers.

People who immediately after the Trianon decisions found they were citizens of other countries sought a means of continuing their studies in Hungarian, said Dr Szaffkó. They were offered courses during the summer, and this is how it all started: even then there was a one month course in Debrecen, similar to one of the main options at the summer school today. Soon people outside Hungary realised that this was a wonderful chance to come to Hungary and to get to know the country.

Step by step, the organisers began to offer lectures about Hungary in different languages, so successfully that at the peak, just before the outbreak of war in 1939, there were more than 800 people coming to the summer school. Probably they sensed that there would be a world crisis just ahead, and this was the last chance to spend the summer with other people to whose fate they could closely relate.  Thousands of leaflets and posters advertising the school had in the 1930s been distributed around Europe and America.

These days, those attending the summer school fall into various categories. There are a number of retired people, and another large part comprises students who are learning Hungarian at a foreign university.

Some years ago, universities in Finland, the Soviet Union, Romania, and Poland were committed to such study. Today the tally is much reduced, and in most of the universities abroad the number of students interested in Hungarian is low, and fluctuates depending on what makes a student interested.

The only substantial country where Hungarian studies continue is Poland – the universities of Kraków, Poznań and Warsaw offer a full degree – and at one time there were some 150 people in Poland studying Hungarian. Poland continues to be a good source of students for Debrecen summer school. 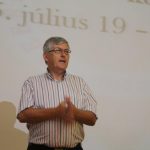 A welcome from Dr Szaffkó.

For all its drawbacks, the former regime in Hungary was very good at making contact with other countries, mostly socialist countries, said Dr Szaffkó. “I myself studied Russian and English, and I spent one semester in Moscow and time in Odessa because it was paid by the government. In addition there were a few scholarships, and I went to England.”

A third group for whom knowledge of Hungarian comes in handy are people keen on music, for example those who want to broaden their appreciation of the great composers Béla Bartók and Zoltán Kodály.

Similarly, historians specialising in Central Europe find it useful to know Hungarian. When Dr Szaffkó taught in America, “half of my students were studying central Europe and had to choose at least two languages from the region.”

Diplomacy is another field where linguistic skills are a huge asset. In Hungary this appears to be less relevant than it was. In the 1970s and 1980s most of the ambassadors and cultural attachés posted to Hungary came to study the language.  Until 1990 Debrecen was just about the only place where you could study Hungarian on a structured basis, but following the change of regime several universities decided to advertise Hungarian as a summer course.

There are those who are interested in Hungarian culture as a hobby, as a ‘curiosity’.  One man became fascinated with Hungary after going to the Sziget rock, folk and jazz festival that every August attracts 400, 000 people from 70 countries to Old Buda Island on the Danube. He enjoyed it so much he decided to go back the following year and get to grips with the language. People in England in particular develop an interest in Hungary when their friends tell them about visits.

Another factor is the growing number of couples of mixed background, who want to work towards matching the language skills of their Hungarian partner. 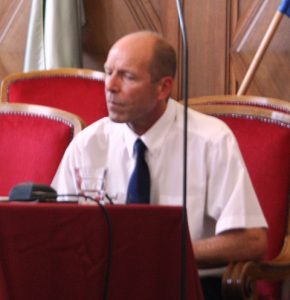 There are lots of people who take up Hungarian as a third or fourth language. In the European Union, every national language including Hungarian is official, and the more languages one learns, the greater opportunities one has in one’s career. As more people speak English, other native languages have become more important.

Finally, there are people who are linguists or historians who use language in their daily work; and there are managers for multi-national companies.

Dr Szaffkó was first involved in the summer course in 1981 as organising secretary, when it had between 500 and 600 students, more than half of them coming to Hungary on scholarships and through country bilateral relationships.

Over the years Dr Szaffkó and senior colleagues such as Prof Pál Lieli, Dr István Rácz and Dr Pál Csontos have striven to make the subject matter more approachable, and indeed, fun.

They are wary of presenting beginners with complicated formulations – Hungarian grammar has only one gender, but nouns have several suffixes of location – and an overhaul of the course textbook packageHungarolingua, has enabled tutors to ease students into learning through showing them how to talk their way through everyday situations.

Dr Szaffkó insisted: “The summer course has always been as much about culture as language. There is something about Hungarian hospitality which the people very clearly experience. We try to entertain them with good food, good drink – that is part of the summer school as well. It is not just being in the classroom that is important. This is the kind of thing that attracts many people.  They do feel at home.”

Dr Szaffkó has encouraged the staging of short plays and recitations in Hungarian and English, and a small amphitheatre has been opened on the campus.  His career research and teaching interests include British studies, Canadian theatre and its history, English theatre history from 1576, and historical drama. 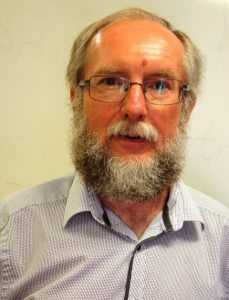 There is much debate about the origin of the Hungarian language, but it is generally described as a successor to a proto-language (perhaps-hypothetical lost parent language) called Uralic said to have been spoken in the Ural Mountain region around 6, 000 years ago.

While Hungarian nouns have no gender, they are declined in seven basic cases, and with close to a dozen suffixes indicating location. Thankfully, the language is phonetic… and learning it is a pleasure at Debrecen.