The ‘mad scientist’ who was a physics genius… 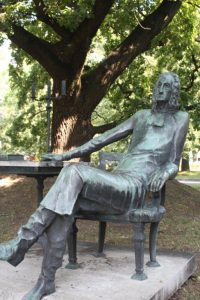 The Professor, sculpted by Imre Varga.

The ‘mad scientist’ who was a physics genius is celebrated among skilfully-crafted public sculptures in Debrecen, Hungary

Under a huge oak tree which must be 150 to 200 years old, among the greenery outside the main building of Debrecen University, the “mad scientist” looks as though he is preparing to hold court once more. The rangy, bewigged (or long-haired) figure displays supreme confidence in his capacity as a physicist ahead of his era.

What we are looking at is the distinctive sculpture The Professor fashioned in bronze in 1971 by Imre Varga, a world -renowned contemporary Hungarian sculptor. Here is represented the 18th century scholar and scientist of Debrecen Reformed College, István Hatvani , who was mocked and feared in his time but had remarkable achievements to his name.

We were “introduced” to The Professor during a tour for students attending Debrecen University summer school. The students marvelled at the sculptural wealth in and around the academic centre.

Dr István Rácz of the Department of British Studies, Institute of English and American Studies, at the University, was our guide.  He explained that Hatvani loved to refer to himself as the Hungarian Faust, and he was accused of having a pact with the Devil.

Dr Rácz said that Hatvani educated generations of students in Debrecen at the Reformed College, the Calvinist institution founded in 1538 which was until the 20th century the city’s leading academy, and where Hatvani himself studied.

In fact, the physicist and mathematician defied popular scorn to develop some of the earliest elements of probability theory, and he used his medical knowledge to care for his students.

He was described as carrying out ‘strange’ experiments. [interestingly the great inventor Nikola Tesla – also described by some as a ‘mad scientist’ – was in 1882 walking through a Budapest park  reciting poetry from Goethe’s Faust  when he drew in the sand a sketch of a solution for harnessing alternating current, an invention which was to start a new industrial revolution]

Hatvani was the first Hungarian to present work on statistics. He tabulated the number of births in Debrecen for 1750 to 1753 to uncover an infant mortality rate of 34.2%, well above the European average of 19%, and sought medical reasons for this. 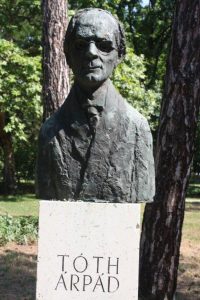 Dr Rácz said that The Professor is considered the best public statue in Debrecen, well composed and sited, close to the main building of the university.

A museum is dedicated to Varga in Budapest, which has many examples of his work, including the Holocaust Memorial behind Dohány Street Synagogue in the Jewish Quarter of the capital. The memorial is in the shape of a weeping willow tree, with the names of Hungarian Holocaust victims on the leaves. Other memorable and sometimes delightfully quirky constructions include a group of women with umbrellas. 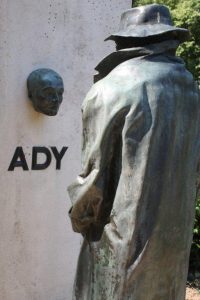 Next statue for inspection on our tour was by Miklós Melocco. In 1977, on the 100th anniversary of the birth of the poet Endre Ady, Melocco completed a commemorative statue, sited in the huge park Nagyerdei  (Big Forest) close to the university.  What is striking and indeed a little macabre is that in the sculptural ensembleyou see the face of Ady in his own death mask. It is as though Ady wants to understand his own forthcoming death.

This sculpture was of special interest for the summer school students because during their course they studied two poems by Ady, who with Mihály Babits (1883-1941),  changed the direction of Hungarian poetry from that of their contemporaries who had failed to move on from imitating the great 19th century writers Sándor Petőfi and János Arany. Babits was editor of the prestigious literary journal West, which as its name implied looked to Western European advances in expression.

Babits had a love-hate relationship with Ady. While Ady was the instinctive and rebellious genius, Babits was apoeta doctus, an intellectual poet.

Ady (1877-1919) studied law at the Reformed College and became a journalist. He published his first poems in 1899, and turned his back on the city of Debrecen, which he used as a symbol of backwardness in his poetry. He moved to Nagyvárad (today known as Oradea, within Romania), which had to him a more satisfying cultural life. Ady joined the radical group Huszadik Század (Twentieth Century) and his third book of poetry,  Új versek (New Poems) marked the birth of modern Hungarian poetry. 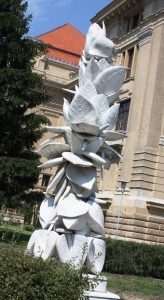 The White Rose of the Revolution, by Miklós Melocco.

Ady was much influenced by West European poetry and wrote symbolic poetry, but the public was shocked by his “new verses of a new era, ” as Ady described them. In 1912 he wrote a lyric novel in verse,  Margita wishes to Live,  modelled on Byron’s Don Juan. In Front of Good Prince Silence, poems of the First World War, contained apocalyptic images reflecting Ady’s sense of horror and doom.  He was terminally ill, weakened by syphilis, when he wrote his last poem Greetings to the Victorious.

Miklós Melocco has, close by –in front of the Reformed Church on the university campus – a work of a different style. This is a marble memorial, named The White Rose of the Revolution which commemorates the Hungarian uprising and heroes of 1956. The rosebud symbolises the birth of the revolution, and huge thorns the approaching completion of the revolution. It was erected in the 1990s, a few years after the collapse of communism, but was not appreciated by everyone. Some critics wanted a more conventional and figurative commemoration.

Born in Rome in 1935, Melocco is a member of the Hungarian Academy of Arts.

The third distinguished sculptor described on this tour was Ferenc Medgyessy (born in Debrecen in 1881, died in Budapest in 1958), who closely studied what the ancient Greek, Egyptian, Sumerian Assyrian and Etruscan practitioners had to offer, as well as the technique of Michelangelo.

Close to the University is Medgyessy’s  statue of János Arany, who is often said to be the “Shakespeare of ballads.”  Arany wrote more than 40 ballads which have been translated into over 50 languages, and four of his poems were being studied during the summer school 2015.

Arany studied German and French at the Reformed College of Debrecen, but tired of scholarly life, and joined an acting troupe. Later he worked as a teacher, newspaper editor, and office clerk. He became close friends with Sándor Petőfi and translated three plays of Shakespeare into Hungarian.

His translations extended to works by Aristophanes, Mikhail Lermontov, Alexander Pushkin, and Molière. One of his own most famous poems is A Walesi Bárdok (The Bards of Wales), composed when was asked to write a poem to in praise of Franz Joseph I – thus drawing a parallel with Austria’s treatment of the Hungarians. 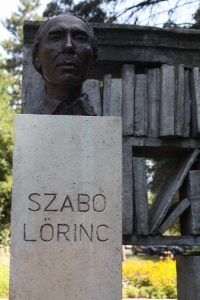 Medgyessy has four allegorical statues representing archaeology, science, art and ethnography outside the grand edifice of the Déri Museum, Debrecen, and there is a gallery full of his work close to the city centre.Mallarmé

Other sculptures close to the university include one by Miklós Borsos of Árpád Tóth (1886-1928) who translated the French symbolist poetry of Baudelaire and Mallarmé Mallarmé Mallarmé MallarMallarMMallarmé é, and writings of Flaubert, Gautier, Maupassant, Chekhov, Milton, Oscar Wilde (including theBallad of Reading Gaol), Shelley, Keats (To Autumn and Ode on a Grecian Urn). He was an elegiac poet in his own right.

Also commemorated, in a sculpture by Tibor Vilt,  is Pál Gulyás (1881-1963) whose most enduring poem is about Debrecen which he views as a port which should be open to anyone who wants to go there. “In a way he was right, ” said Dr Rácz, “because I believe tolerance is the most important value even today.”

Gulyás was in the tradition of the great poet/linguists of Hungary: he could read Finnish, ancient Greek, Icelandic and Romanian. Folk poetry had a great effect on his works. He regarded the Kalevala – the national saga of Finland reworked by Elias Lönnrot in the late 19th century – as the forerunner of Hungarian literature.Gulyás once said: “Books are the most intimate friends of people.”

On Kálvin tér (Calvin Square) is a statue by Miklós Izsó of Mihály Csokonai (1773-1805), the outstanding poet of the Hungarian Enlightenment, who successfully adapted Western European rhymed metrics to Hungarian verse forms. He was sympathetic to revolutionary movements and blacklisted.

A stone statue of Mihály Fazekas (1766-1828) has him looking out of a window. Fazekas authored the epic poem Lúdas Matyi (Matt the Gooseherd), a protest against the cruelty of country landlords. The artist is Edit Rácz, born in Budapest in 1936, who continues to create work, including abstract sculptures in glass.

Finally, in our sculpture-linked poetry peregrination, we learned about Lőrinc Szabó (1900-1957) who translated prolifically from German, French and English. He tackled works including Shakespeare (Timon ofAthens,  As You Like It,  Macbeth,  Troilus and Cressida),  Coleridge’s Ancient Mariner and Kubla Khan, Molière’s L’École des femmes, Goethe’s The Sorrows of Young Werther, and Thomas Hardy’s Tess of thed’Urbervilles. His own poetry collections, starting with Earth, Forest, God (1922), are seen as protests against the bourgeois order and disillusionment, although he took a rightward turn and eventually a more harmonious view of the world in his autobiographical lyric cycle Song of the Crickets (1947–57).

There are two statues of Szabó in Debrecen. The one we saw on our tour close to the university portrays him with his head on a book shelf. This is by Erzsébet Schaár (1908-75). Another, in the city centre, shows him leaning against a lamp post; the sculptor is János Lestyán-Goda, who was born in 1972.

The tour over, we returned to the main building of the university which is an architectural marvel. It has been called ”the most beautiful university building in Central Europe” and was finished in May 1932, taking over many departments and faculties from the city’s distinguished Reformed College.

The university was erected as the largest building in the city, in eclectic and neo-Baroque style. Especially impressive is the main hall and its 29 m high glass roof. It houses among its facilities the University Library, which, with more than 6m items, is the second largest library in the country.