The S/T “De Zhou” arrived at the casualty scene on 22 June and towage commenced to Pusan, South Korea the next day. After 20 days and a distance of 3, 200 nautical miles with average speed of 7 knots, the convoy arrived safely at Pusan on 11 July. Following Port Authorities’ instructions, the “Navios Cyprus” anchored at anchorage No.5 with the assistance of the S/T “De Zhou”, the port tug “Haeryong Soz” and a pilot. The “De Zhou” anchored close to the casualty providing standby services.

The scheduled berthing of the “Navios Kypros” on 12, 13 and 14 July was postponed due to adverse weather conditions caused by the passing typhoon “Chan Hom”. On 15 July the weather improved appreciably and the vessel berthed at “Orient Repair Yard” with the assistance of four port tugs and a pilot. The “De Zhou” remained on standby at anchorage No. 4 ready in all respects should any assistance be required due to the typhoon “Nangka” which was passing by Pusan, at a distance of 200 miles.

Salvage services terminated on 17 July when the “Nangka” typhoon subsided and S/T “De Zhou” demobilized to Shanghai arriving on 19 July after a six-week round voyage.

On 21 July the “TSAVLIRIS UNITY” arrived at the casualty’s position and towage commenced towards Colombo. During the towage the tug master was instructed by the “AMBER L” Owners to proceed to Trincomalee, Sri Lanka, instead of Colombo.

On 28 July, the convoy arrived safely at Tricomalee where the “TSAVLIRIS UNITY” assisted the casualty to anchor at the indicated position (inner anchorage) providing subsequently stand-by services. The “TSAVLIRIS UNTIY” demobilized to her permanent station on 30 July.

On 14 August 2015, the Product Chemical Tanker “FAIR AFRODITI” (12, 756 GT – 8, 513 DWT) suffered significant damage following an explosion during tank cleaning while she was off Lome, Tongo.  Severe structural damage was sustained, flooding of the engine room and cargo tanks occurred and the casualty listed about 18 degrees to port. The entire crew abandoned the casualty. Prior the incident the vessel was proceeding to Lome anchorage for STS loading.

On 15 August 2015, Tsavliris Salvage deployed the T/B “RATCEL J’’ and the AHTS “THE GUARDIAN” to provide assistance. On 16 August a Tsavliris Salvage team (comprising of a salvage master, salvage engineers and riggers) was mobilised from Greece to Lome as well as suitable salvage equipment.

The Tsavliris Salvage team boarded the vessel on 17 August and remained until 8 September.  During this time the team managed to stabilise the vessel by undertaking the following:

-Correcting the vessel’s list and trim by transferring ballast and removing oily water and bunkers.

-Removing all bunkers, oily water, lubricating oil (about 215 m3) and paints from the vessel.

-Removing provisions and sealing the fridges.

The salvage services were completed on 8 September. The Tsavliris Salvage team continues providing services under a Care Taking Arrangement signed on 9 September.  A skeleton salvage team remains in attendance and the tug “THE GUARDIAN” is standing by providing basic essential services until the vessel’s final disposal. 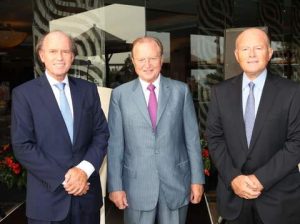 Tsavliris Salvage hosted a successful event during Maritime Cyprus 2015 on the evening of Friday 11 September.  The event was held at the impressive Four Seasons Hotel in Limassol and attracted over 200 people from all sectors of the shipping industry.  Guests included the Cypriot Minister of Transport, Communications and Works, representatives from the Department of Merchant Shipping of Cyprus, the Cyprus Shipping Chamber, the Cyprus Union of Shipowners, the Cyprus Marine Environment Protection Association (CYMEPA) as well as representatives from shipping and management companies, P&I Clubs and underwriters.

George Tsavliris, principal of Tsavliris Salvage and president of CYMEPA welcomed everyone noting that the Tsavliris group is no stranger to Cyprus.  The group’s founder, Alexander G. Tsavliris, had a presence in Cyprus from the early 1960s, when he first registered ships with the Cyprus Registry.  By 1967 he had a dozen cargo vessels registered under the Cyprus flag.  Since then the group has had a continued presence in Cyprus in the fields of salvage & towage and environmental protection. He announced that Tsavliris is actively focusing on offshore oil & gas within the Cypriot continental shelf.

The Group is very much a part of the Cyprus shipping community as it is also a part of Tsavliris.  Today, four of the entities within the Tsavliris group are registered in Cyprus, maintaining a strong presence on the island.  In addition, the Tsavliris Cultural Foundation has been formed in Cyprus, supporting cultural activities.

Testament to the importance of Cyprus to Tsavliris Salvage was the fact that all three principals and their families were at the event –Nicolas, George and Andreas Tsavliris; as well as some from the new generation Claire and Alexandros Tsavliris.  Many of the Tsavliris senior personnel also attended, including the Operations Manager, Captain George Polychroniou; CFO Stavros Perdikaris; in-house lawyer Maria Adamopoulos; head of marketing and public relations Lia Panagopoulos, and many more.