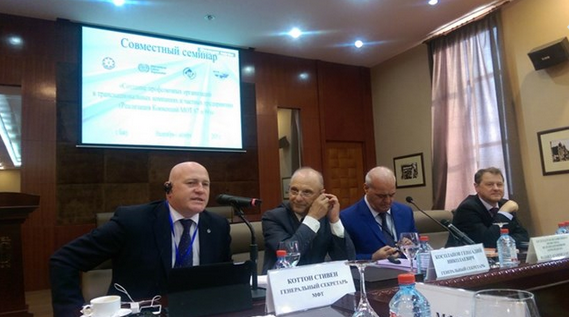 Around 40 leaders from railway unions in Eastern Europe and Central Asia met with ILO experts and senior ITF representatives in Baku, Azerbaijan from 30 September to 1 October to discuss organising and the promotion of ILO conventions throughout the rail industry.

Discussion focused on topics related to the impact of organisational and legal changes in the railway industry on the trade union movement; the problems of implementing fundamental ILO conventions in the CIS region; the promotion of ILO conventions; and other issues facing ITF affiliates.

The ILO senior workers’ activities specialist, Sergejus Glovackas, spoke about the importance of promoting and implementing ILO conventions 87 and 98, with a special focus on supply chains and multinationals in the railway sector. John Bliek, ILO specialist on enterprise development, addressed the ILO Declaration on Multinational Enterprises.

Oysten Aslaksen said: “Restructuring of the world’s railway systems is taking place. This means privatisation and a split between infrastructure, operations and maintenance that causes great challenges to railway trade unions. Sonner or later this will come to the CIS (Commonwealth of Independent States) region and we have to be prepared.”

2015 ABP Marine Conference comes to the Port of Ipswich

Another 92 year-old victim takes total to 56