Expert speakers and participants confirmed for Shipping & The Law 2015 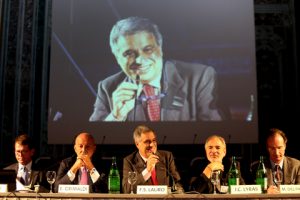 08 October 2015. The 6th edition of Shipping and the Law, organised by Studio Legale Lauro under the patronage of The Italian Shipowners’ Association Confitarma takes place in Naples 15 and 16 October.

This annual event brings together some of the most outstanding personalities of the industry from ship owning, shipbuilding, finance and insurance and other maritime experts.

The conference works will begin on the morning of Thursday 15th October with a speech by Efthimios Mitropoulos on ‘Recent Developments in International Shipping’. He will be followed by Mans Jacobsson, Former director of the Oil Pollution Compensation Funds, who will discuss “To What Extent do International Treaties Result in the Uniformity of Maritime Law?

Event organiser Francesco S. Lauro will make a presentation on the “The Shipping White Knight Fund”,  to be followed by an in-depth discussion by leading figures of international major banks, investment funds, as well as ship owners like Angelo D’Amato, Giuseppe Rizzo and other experts.

The afternoon’s ‘Shipping and the Law’ session will be chaired by Sir Bernard Eder and Francesco S. Lauro, which will feature a debate among important lawyers, arbitrators, prominent ship owners, and operators in the maritime sector. The day will conclude with a session dedicated to technological innovation, energy efficiency, and environmental and safety regulation, which in which the most important international groups that operate in this sector will be represented.

“The success of previous editions of Shipping and the Law, due mostly to the quality of speakers and the interesting topics discussed, made it necessary to cover the conference over the course of two days, ” says event organiser, Francesco S. Lauro.“Despite this, there always seems too little time for what is a total immersion in the maritime culture and also more general issues.”

Discussions will include an update on the Mediterranean migration crisis, a roundtable discussion analysing the scenarios and challenges of changes in the maritime industry and environmental regulations.

Among the influential personalities who will participate in this discussion are Lorenzo Banchero, Giuseppe Bottiglieri, Peppino D’Amato, Federico Deodato, Mauro Iguera, Roberto Martinoli, Ugo Salerno, George Tsavliris, Mario Mattioli and John Xylas.
There will also be a presentation by Professor Roberto D’Alimonte on “The European Union: To Be or Not To Be?”

The afternoon sees the ‘Managing the Risks’ session dedicated to marine insurance and chaired by Federico Deodato and Mauro Iguera.

This year, the conference works will close with a session titled, “Looking to the Future”, which will be chaired by President of the Young Italian Shipowners at Confitarma, Andrea Garolla di Bard, and Lorenzo Banchero. Attended by several young ship owners representing the next generation, they will try to divine the future of shipping alongside the more established experts of the industry.

Thursday evening sees a black tie Gala Dinner hosted in a XVI century Palace which belonged to the scholar and collector Gaetano Filangieri, now a private museum which will reopen after many years for the event. The Conference itself will be held in a jewel of the Neapolitan architecture, the octagonal chapel of Pio Monte della Misericordia where delegates will be able to admire, among other important works of art, one of the most magnificent masterpieces of the Italian painter Michelangelo Merisi Da Caravaggio’s ‘The Seven Acts of Mercy’.

The event concludes on Friday evening with an informal outdoor reception on the Bay of Naples. To register for the conference, please visit: www.shippingandthelaw.org/

About Studio Legale Lauro
Established in 1993, Studio Legale Lauro has offices in Naples and in Rome and offers a wide range of legal services in Maritime, Commercial and International Law matters. Its lawyers provide specialised assistance in Shipping, Transportation, Commercial, Corporate, Banking, Insurance, Construction and Bankruptcy law, whether in an advisory capacity or as counsel in litigation proceedings in Italian courts and arbitration tribunals. Through its work with leading Italian and foreign shipowners, banks and financial lenders, Studio Legale Lauro has developed significant expertise in Mergers & Acquisitions, in Partnership and Joint Venture Agreements, and in various types of Financing Transactions. It also regularly acts on behalf of Shipowners, P&I Clubs, Underwriters, Charterers, Traders, Logistic Operators, Ship-Builders, Port and Infrastructure Builders, Banks and generally for maritime and commercial clients worldwide.