Two strangely alluring tableaux, mixing social glamour and undersea images, make a considerable impact within an exhibition of work entitled I Never Lied To You by BA alumni of Camberwell College of Arts, London.

Dream Island and Summer Girls teem with intriguing cameos and are imbued with colourful lyricism. They are the work – in paper, watercolour, PVA (an emulsion), glitter, wiggly eye (stick-on beads) and rhinestones – of Tokyo-born Akiko Ban, who is an established and acclaimed London artist.

Akiko secured her BA (Hons) in Drawing in 2006 at Camberwell, after which she went on to secure her MFA in Fine Art (Sculpture) at Slade School of Fine Art.

Camberwell has nurtured many students who went on to fame and artistic achievement, and if you have not realised by now, there is a clue to this in the title of the exhibition. I Never Lied to You was a 1970 composition by guitarist Syd Barrett, who died in 2006. While at Camberwell in 1964  he was involved in a band called Tea Set, and fellow members Roger Waters, Bob Klose, Rick Wright and Nick Mason agreed to Barrett’s suggested new name for the group: the Pink Floyd Sound. 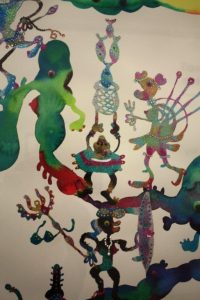 The exhibition recalls 15 graduate artists to an institution to which they continue to have an attachment. “I had a wonderful time here, ” enthused Akiko, standing near her new work, on the same first floor as her classroom of a decade earlier.

Akiko’s latest works embrace the kind of glorious miscellany of merrymaking and mini-monsters that was favoured in 16th century Flemish genre painting. She excels in depicting creatures of an engaging quality in soft shapes, each creation confidently radiant. The bejewelled beings (including a fashion girl toting four handbags) appear to be partying as they bestride melting sea creatures.  The viewer can form his or her own interpretation of the pageant, but the plethora of detail means that one can comfortably spend intriguing hours surveying the scene.

The marine element in these magnificent works was reinforced by a two-week stay Akiko enjoyed in Croatia. “I love the sea, ” she said. 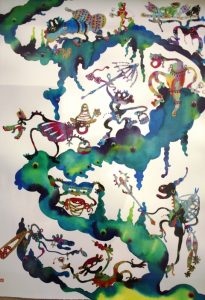 The whole is informed with a precision instilled by her skills in calligraphy, of which she is a qualified Japanese master; and is in accord with her artist’s statement in which she says: “My fundamental intention is to give life to materials and generate separate entities which exist on their own. I create my own ritual objects and environments which uplift my soul. My work is about my personal mythology which embodies the essence of the world I live in.”

She is currently working hard, along a triple track: painting, sculpture (in plaster and other materials) and jewellery. In the last named discipline, her new product in conjunction with London design studio Tamassy Creative is called Mystic Forms and features handcrafted Perspex jewellery. For the private view evening at Camberwell, she was sporting ear-rings from the range – in bold design, but neither over- nor under-stated.

It is what she calls ‘wearable art, ’ combining inspiration of ancient art with cultural overlay of contemporary London and Tokyo. She has produced hats and silver jewellery for the Japanese fashion brand matohu, artwork for a project with the electronic music duo Basement Jaxx, and designed fashion items for the Japanese animation Neon Genesis Evangelion. 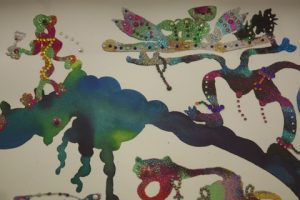 A short time ago, Akiko who had for years preferred to work within a silent atmosphere, began instead listening to jazz – and found that music to be in tune with her improvisatory method of composition.

She has had solo exhibitions in London and Tokyo, and participated in group exhibitions in London, Singapore, Hong Kong, New York and Stockholm. In June 2015 she exhibited at Platform Projects Art-Athina, Faliro Pavillion, Athens. Art-Athina is described as the largest annual visual arts event in Greece. A year earlier, she was one of the exhibitors at the Athens fair under the auspices of London-based Lubimirov-Easton. 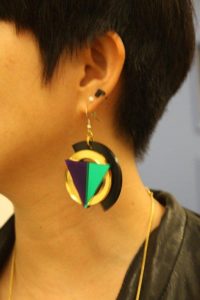 I Never Lied to You: exhibition by BA alumni of Camberwell College of Arts runs until November 20 2015 at Camberwell Space Projects, at the college, in Wilson Road, London SE5.http://www.arts.ac.uk/camberwell/events/  Akiko’s website is www.akikoban.net

The Amazing World of MC Escher…