How soon will ships sailing without a crew be a reality?

How soon will ships sailing without a crew be a reality? Insurers offer a view during IUMI conference

Unmanned merchant ships could begin sailing the seas in the next decade or so, according to the opinion of many professionals in the marine insurance industry.

This view emerged during a straw poll of some of the underwriters attending the 2015 annual conference of the International Union of Marine Insurance.

Delegates at the Berlin meeting were asked in a snap electronic poll: “When will we see the first unmanned commercial ship?” Of those present, 48% speculated such a project would be live within the next 10 years, 38% said between 10 and 20 years from now, 4% said 20 to 30 years, and 10% insisted “it will not happen.”

The question was posed by Hans Anton Tvete, Oslo-based senior researcher in maritime transport in the strategic research and innovation department of DNV GL. Mr Tvete had just afforded the audience a glimpse of the possible structure and operational pattern of unmanned vessels of the future.

He was speaking at the IUMI conference during the President’s Workshop session, entitled Digitalisation and Cyber Threat in the Maritime Industry.

The ReVolt 100 teu, 1, 300 dw vessel would have a speed of 6 knots and operational range of 100 nautical miles. The energy requirement was equivalent to that of a small car. Battery powered, it would have no direct emissions and be ballast-free. High efficiency and maintenance-free, it would be without cavitations (vapour pockets that might cause structural damage).

The ship would incur low operational expenses, but would involve high capital expenditure, albeit that with recent developments prices were dropping rapidly.

The concept envisages twin screw and podded propulsion, and a retractable bow-thruster for manoeuvrability.

Batteries would be charged at every port en route – with an average port stay of four hours – and the development of this type of port infrastructure would benefit other ships with the potential to be battery-powered. A low charge rate would give longer life. Energy efficiency measures would include solar panels, Flettner rotors, sails and wave-assisted propulsion. Vacuum-based automatic mooring would be a feature. The ship would need dedicated terminals for fast cargo handling. Extended hull sides would eliminate the need for extra lashing.

Mr Tvete said: “The need for shifting transport from road to sea is pressing. Today’s technology holds great promise for more efficient, environmentally-friendly and safer ships in the future.” Challenges related to regulation, security and liability had to be addressed.

In answer to questions, Mr Tvete said: “We are a classification society; we do not build ships.  We see that technology enables this and the industry is moving in this direction.  Hence it is the position we take.” 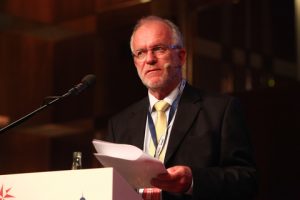 Taking a more cautious view of the practicality of unmanned ships, a later speaker, John Murray, marine director of the International Chamber of Shipping, asked: “The IMO e-Navigation project – will it change shipping?”

The International Maritime Organization has defined its e-Navigation initiative as “the harmonised collection, integration, exchange, presentation and analysis of maritime information onboard and ashore by electronic means to enhance berth-to-berth navigation and related services, for safety and security at sea and protection of the environment.” IMO says that “to effectively use this as a tool to reduce human error, owners and operators should incorporate e-Navigation Best Practices as an integral part of their Bridge Resource Management.”

Mr Murray outlined what he saw as the issues, including a lack of tangible progress, inappropriate technology and regionalisation of approaches to the prospects.

It had yet to be seen how all technical and maintenance issues could be resolved remotely, said Mr Murray. For the wider industry there was much further to go before autonomous ships would play a bigger role in the transport of cargo and people on anything other than an experimental basis. The risks had not yet materialised. 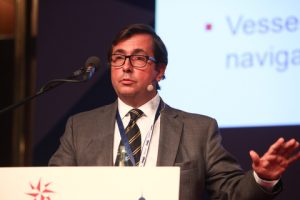 In a presentation entitled “e-Navigation – what’s in it for insurers?” Jorge Pecci, regional executive for the Americas at AIG Property Casualty, Miami, emphasised that the costs of groundings, collisions and pollution cleanup and prevention were increasing every year.

Lack of standardisation was a challenge for the industry: there were 38 different manufacturers of ECDIS, the Electronic Chart Display & Information System that is an alternative to paper nautical charts.

The navigable sea space was shrinking, said Mr Pecci, with greater volumes of traffic. He put on the screen a picture showing a small fishing boat sailing close to a large merchant ship. The small craft does not have an AIS (Automatic Identification System) transceiver. That was a problem with unmanned vessels: the large vessel won’t see the little one in heavy weather unless the latter has an AIS transmission.  That mis-match was not subject to regulation “and that is something we have to think about. We must ensure that new technologies can aid, rather than hinder the mariner. Navigation systems, vessel traffic information and communication infrastructure must work as efficiently as a Swiss watch.”

While the intent of e-Navigation was to enhance situational awareness and decision support, there were several concerns: the length of the transitional period and related risks, the question of the implementation plan, the regulatory framework, technical requirements, training of seafarers and of shore-based personnel, and implementation in an older fleet.

Mr Pecci stressed the need for harmonisation, and technology must be linked to the human element. IMO had a fundamental role as regulator.

On the question of cyber-risk, he said of the wider industry: “I am not sure we are the best in class in protecting our own data.  Ships are no longer isolated units.  Shipping will be a data-centric industry.  We have to create loss scenarios. We have to think about aggregation scenarios. I believe the complete logistics industry will change completely with big data and independent computers giving us sensor-based information.” This would mean huge investment in port authorisation “and the basis for interesting projects for us.”

The latest position paper from the IUMI political forum, which takes forward the organisation’s activity on major marine subjects, says that IUMI will monitor the development of e-Navigation through the IMO.

History has a Face

I can comment all I want. I believe it is possible if the supplied equipment have a near zero MTBF (Mean time before Failure) or instead of one engine and ancillary equipment we have two. Also the separation lanes are well identified. That the owners will ask that the equation cost of equipment is less than the cost of the labour. The mil spec equipment which should be installed will make this equation impossible to be in favour of the unmanned vessels. Besides, training of labour force to watch out of these unmanned ships will be costly too. Cyber Security will be expensive and more so then the piracy security. And so on and so forth.