A Royal pioneer in promoting trade with modern China…

Duke of Kent arrives in China for British Energy Exhibition in Beijing, June 1979.

A Royal pioneer in promoting trade with modern China: new biography ‘HRH The Duke of Kent: A Life Of Service’ is published

When the Queen termed the four-day state visit to Britain by Chinese President Xi Jinping a defining moment in Sino-UK relations, some historians will have recalled an even greater turning point 35 years earlier.

The Queen’s cousin, His Royal Highness Prince Edward, Duke of Kent had been in 1979 the first member of the royal family to set foot in modern China.

Foreshadowing what has been heralded in 2015 as the signing of billions of pounds worth of trade deals to coincide with the Chinese leader’s visit, the Duke of Kent had led a pioneering trade mission to a country which at the time had yet to unleash its full economic might.

Prince Edward’s foray to the Land of the Dragon is among many public initiatives and commitments admiringly chronicled in a new biography,  HRH The Duke of Kent: A Life Of Service, by Celia Lee. The author maintains the precedent set in her previous books of garnering a wealth of detail from extensive research into their subjects, which over the years have included slices of key military history and the story of Sir Winston Churchill and his family.

Prince Edward arrived in China the year after the economic reformer Deng Xiaoping had become ‘paramount leader.’ The Duke’s particular focus was the British Energy Exhibition in Beijing, where he posed for photographs with Premier and Chinese Communist Party chairman Hua Guofeng, and other leading members of the Communist Party. British officials present included Sir Percy Craddock, British Ambassador to China, and Timothy George, Counsellor at the British Embassy. Prince Edward dined with the leading members of the Party in the Great Hall of the People. Sir Percy, who served as ambassador in China from 1978-83, was instrumental in the new approach to the Middle Kingdom; and he was to become foreign policy advisor to Margaret Thatcher.

The bonding between Chinese politicians and the enterprising member of the royal family found its echo in October 2015 when President Xi’s programme in London was in large part devoted to ceremony, including a procession along the Mall to Buckingham Palace, an address to MPs and peers in Parliament’s Royal Gallery, and a State Banquet at Buckingham Palace.

Prince Edward, who celebrated his 80th birthday recently, is in the limelight much less than some members of his family, but as Celia Lee points out, as an aide-de-camp to the Queen he acts as the honorary military attendant to the monarch and has thus performed royal duties on her behalf for more than half a century.

Prince Edward has represented the Queen during independence celebrations in the former British colonies of Sierra Leone, Uganda, Guyana, Gambia, and recently in Ghana for the 50th independence anniversary celebration.

As a former Counsellor of State he was subject to carry out certain state functions during the absence abroad of the Queen, including presiding over Privy Council meetings, signing state documents and receiving the credentials of new ambassadors to the UK. 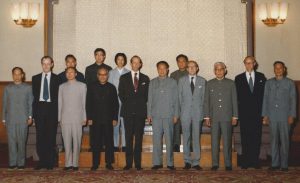 His father was Prince George, Duke of Kent, the younger brother of George VI and Edward VIII; and his mother, Princess Marina, was the daughter of Prince Nicholas of Greece.

Long after most people would have retired, Prince Edward leads a busy life as patron or president of charities and organisations which number more than 100. “His life is one of dedication to duty, and he works hard every day, enjoying only one month’s holiday each year in August, ” we learn from the book.

One of his major roles for many years was that of representing British trade overseas. In 1976 he became vice-chairman of the British Overseas Trade Board, later renamed International Trade and Investment. Although he had been a member of the BOTB for nearly a year, the appointment of the 30-year-old royal caused some raised eyebrows, but he carried out his duties with aplomb, travelling widely to represent the Government and foster trade relations with foreign countries and companies and at the World Economic Forum at Davos.

In all this he worked closely with his Private Secretary, Sir Richard Buckley, and to learn more about industry he embarked on a tour of businesses at home, visiting at least 50 factories including British Leyland and more modest enterprises. The position was unsalaried – but he loved the job.

In the BOTB capacity, he represented the UK for 25 years, during which he made 60 overseas trips. One was to the International Exhibition at Genoa. The Expo had as its theme Christopher Columbus, the Ship and the Sea, as it was 500 years since the epic voyage to the Americas by the Genoese seafarer. Prince Edward referred in his address at the British Pavilion to the long-standing maritime links of the UK and Italy – starting with the adoption by England and the City of London in 1190 of the St George’s flag for their ships entering the Mediterranean, to benefit from the protection of the Genoese fleet.

One chapter of the 220, 000 word, copiously illustrated book is dedicated to the Royal National Lifeboat Institution, which in addition to its rescues off UK shores, has an international development programme offering overseas assistance in training and equipment. The Queen is patron of the RNLI, and Prince Edward has – “curiously, though, he is not a good sailor!” commented Sir Richard Buckley — been its president since 1969.

Prince Edward became President of the Royal United Services Institute for Defence and Security Studies (RUSI) in 1975. The oldest such institution in the world, it was founded in 1831 by the Duke of Wellington and is a British think tank for research into defence and security,   including terrorism and the challenges from other man-made threats and natural disasters.

The Duke is especially keen on health charities, and his extensive links with hospitals and research organisations are listed.

Many members of the public know him best from presenting the prizes to the winners and runners-up at the Wimbledon Lawn Tennis Championships. Along with his wife Katharine, Duchess of Kent, he has met dozens of top international tennis players including Britain’s Virginia Wade, Scotland’s Andy Murray, and the US sisters Venus and Serena Williams.

* The full caption of picture no.3: The Duke Of Kent (centre) in Beijing in 1979 with Chairman Hua Guofeng and leading members of the Communist Party; second from left Timothy George,  Counsellor at the British Embassy; third along from the Duke on the right,  Sir Percy Craddock, British Ambassador to China; 2nd from right, Sir Richard Buckley, Private Secretary to the Duke.