Attracting Women to challenging careers: at sea and in space 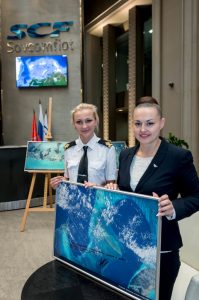 On 22-23 September 2015 a round table meeting took place in St Petersburg, Russia to look at what motivates women to embark upon a career in challenging professions, such as at sea and in space, that have been traditionally the preserve of men. Organised by the Russian Federation of Cosmonauts, the Admiral Makarov State Maritime University and SCF Group (Sovcomflot), also the event hosts, the meeting saw contributions from a wide range of leaders in their field. 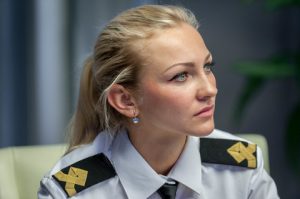 When considering what motivated their career choices, Mrs Serova said that her interest in space was aroused from an early age, in the first year of primary school, as a result of a teacher that discussed space a lot. For Ms Mitrofanova, by contrast, a seagoing career was certainly not an early ambition: “I never thought of becoming a seafarer and before embarking upon my maritime education had never even seen the sea.”  Once she has seen the sea, however, she quickly became enchanted by it. She now believes the attractions of a career at sea include the ability to focus fully on work, as a true professional, with long holidays in between that offer the opportunity to spend time with friends and family. 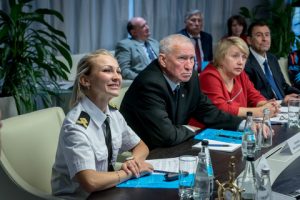 Looking at the challenges of their respective careers, Ms Mitrofanova remarked that initially she had to work especially hard to be taken seriously and to prove to some male colleagues she was “good enough to work with them.” Mrs Serova added the importance of not just having the right education to train as a cosmonaut but also of being suitable physically for space travel – these strict criteria rule out both men and women from becoming a cosmonaut. 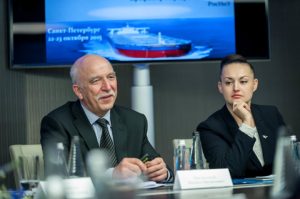 Asked to identify areas in their respective professions where women perform better, Mrs Serova and Ms Mitrofanova both agreed that there is no need for competition between the sexes, and that a better work outcome is possible as a result of cross-gender cooperation.

The roundtable meeting conclusions were:

Russia has a track record of facilitating the progress of women in their careers, dating back to the early twentieth century. A recent international research report ‘Women in Business: the path to leadership’, published by Grant Thornton (2015), found that women represent 40 per cent of those in senior management roles in Russia. This compares with 15 per cent in Brazil, 14 per cent in Germany and just 8 per cent in Japan. The organisation of this round table meeting reflects a continuing desire, on the part of leading Russian organisations, to maximise the full potential of women in the workplace.

“This round table has been an opportunity to share experiences and to raise the profile of careers in space and at sea amongst women. At Sovcomflot, human capital is our greatest asset and, together with the Russian Federation of Cosmonauts, we are committed to employing and developing the highly skilled professionals that our respective organisations depend upon. Anything we can do to encourage applications from women not only makes us better corporate citizens it also makes sound commercial sense.

“What this round table meeting also demonstrates is a need to build awareness of careers at sea and in space, especially as when such awareness is low amongst women in contrast to other professions such as medicine and law. I’m very grateful to all the round table participants for their input and especially to Mrs Serova and Ms Mitrofanova for being excellent role models as professional women.”

Born in Pskov, in the North East of Russia close to the border with Estonia, Lyana Mitrofanova (24 years) is a graduate of the Admiral Makarov State Maritime University in St Petersburg, Russia. This was the same University attended by the legendary Anna Schetinina, the world’s first woman to serve as Captain of an ocean-going vessel.

Ms Mitrofanova began her career at sea aboard Russia’s sail training ‘Tall Ship’ Mir. Subsequently she completed her cadetship serving on oil tankers. Upon qualification, in 2014, she became Fourth Officer on Pskov, a 170, 000-cubic metre capacity liquid natural gas carrier and one of the most technically advanced merchant vessels.

In August 2015, Ms Mitrofanova was promoted to the rank of Third Officer with PAO Sovcomflot, Russia’s largest shipping company and one of the largest tanker companies in the World.

Ms Mitrofanova is single and when not at sea resides in the City of Pskov, Russia.

Yelena Serova (39 years) was born in the Far East of Russia, in the village of Vozdvizhenka. She was the first Russian woman to visit the International Space Station and the fourth woman from Russia/USSR in space. Valentina Tereshkova from the USSR was the first women in space in 1963.

Ms Serova graduated as an Engineer from the Aerospace faculty of the Moscow Aviation Institute in 2001. She later studied at the Moscow State Academy of Instrument Engineering and Information, graduating as an Economist in 2003. Her professional career began as an Engineer with the space rocket company Energia in Russia, and then she worked at Russia’s space programme mission control centre.

Selected as a cosmonaut at the age of 30, in 2006, Ms Serova completed her basic training at Star City in 2009. She later served as flight Engineer in Expedition 41, which was launched in September 2014 and returned to Earth in March 2015.

Ms Serova is married to former cosmonaut Mark Serov and together they have one daughter.

SCF Group (PAO Sovcomflot) is Russia’s largest shipping company and a world leader in the maritime transportation of hydrocarbons as well as the servicing and support of offshore oil & gas production. The company’s fleet numbers 144 vessels with a combined deadweight of 12.48 million tonnes. SCF Group specialises in the shipping of crude oil, liquefied gas and a wide range of oil products. The Group’s vessels perform complex towing operations and geophysical survey work at offshore oil & gas fields. Sovcomflot supports large-scale offshore energy projects in Russia and overseas, including: Sakhalin-I, Sakhalin-II, Varandey, Tangguh, Peregrino, Prirazlomnoye, Noviy Port, Yamal LNG and others. SCF Group employs over 9, 300 personnel both on land and at sea. The company is registered in Saint-Petersburg and has representative offices in Moscow, Novorossiysk, Murmansk, Vladivostok, Yuzhno-Sakhalinsk, London, Limassol, Madrid, Singapore and Dubai.