By James Brewer and John Faraclas

Greece may be ready to announce measures early in 2016 to encourage foreign investment in the tourism sector, alternate tourism minister Elena Kountoura said during an exclusive interview with AllAboutShipping.

Ms Kountoura said on the sidelines of the World Travel Market in London that she was pressing hard to persuade her ministerial colleagues to agree to new incentives to develop tourist infrastructure further.  This could boost for instance the hotel and marina sector. The minister said that she was pushing very hard for greater support for the industry, and hoped that this would bear fruit in the first weeks of the new year.

…speaking to the media…

The minister sought to counter reports that holidaymakers had been put off by the sight of refugees arriving in Kos, Lesvos and other islands. “We are supportive of human rights, ” she said, “and the tourists were great, especially those from the UK. They came with so much help and for example brought clothes for the little children.”

There was no sign of tourist bookings being hit by the migration question, and there had been plenty of interest since mid-year.

To counter the decline in the number of tourists from Russia following that country’s economic difficulties, the minister said that she had embarked on   trips to Poland, Austria, South Korea, Saudi Arabia and the Emirates to encourage the opening of new charter flight routes.

In an address to a Greek tourism networking event, the minister said: “The most important things are investments.  We have great opportunities right now.”

She said that 2014 was wonderful for Greece, with record arrivals and revenues, and 2015 was seeing a further record. “We hope that this season will close with 26m arrivals and €14.5bn revenues. “For a small country like us, this is very important. I want to thank from the bottom of my heart all the traditional markets such as Germany, Britain, Italy, the Netherlands and North Europe. They trust us and were there at the difficult times we went through, and they saw that we shall be their friends forever.

…with more than a full house attending…

“We are one of the 15 most popular worldwide destinations, but we can reach out to be one of the five most important destinations. Aegean cruises, luxury tourism, mass tourism… we can offer everything.”

Christina Kalogera, director of the Greek National Tourism Organisation UK & Ireland office, affirmed: “Greece is the place where you are spoilt for choice.”

Rhodes Marinas announced the trial operation of a new marina in Rhodes. Located near the medieval town, the marina, which will be accessible all year round, is next to the main commercial port with regular and frequent ferry itineraries. It has an operating depth of 5 to 6.5 m and is the only marina in Greece that can accommodate mega-yachts of up to 120 m. The new marina currently features 382 boat berths with a view to increase to 563.

Piraeus Port Authority recently announced that Piraeus will be the homeport for Carnival Vista, the largest ship of Carnival Cruise Lines at 133, 500 gross tons, and with accommodation for 4, 000 passengers, and with crew of more than 1, 500. Features will include SkyRide, a suspended open-air cycling activity and the world’s first IMAX theatre on a ship. Carnival Vista will launch its Mediterranean cruises in spring 2016. Carnival Cruise Lines has announced that in 2016 it will integrate two more Greek ports in their new programme

Meanwhile, the extension of the passenger port of Piraeus to create six moorings for cruising vessels with a length of 350 m is soon to be completed. The project aims to convert Piraeus into the main cruise centre of the Mediterranean and was undertaken to accommodate the continuing enlargement of ship size. 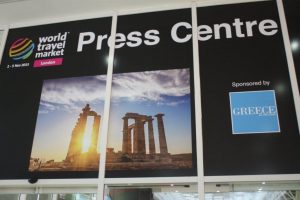