Club house dreams made a reality thanks to ABP 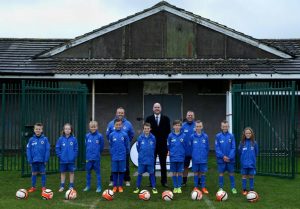 Recent discussions between Immingham Pilgrims AFC and Associated British Ports (ABP) have led to an agreement which will see ABP hand a much-needed donation of £5, 000 to the football team.

The dream of renovating the disused Roval Drive building and creating a thriving club house belonged to Under 10s football manager, Mark Davis: “Even though the Immingham Pilgrims AFC has been up and running for over 30 years, we have never had a real base to call home that the children and coaches can be proud of, until we came across Roval Drive.”

Originally a sports pavilion, the building was abandoned and fell into disrepair. The building also suffered at the hands of vandals but Mark saw its potential.

“I’ve been trying to get the club access to this building for around two years now and finally, it has become a reality.” Said Mark. “There is a lot of work to do but with ABP’s support, we are now able to make these changes and improve the building more quickly than I imagined.”

Plans have already been drawn up  and once completed the club house will have brand new changing facilities and a kitchen where parents and supporters will be able to purchase refreshments before kick-off on match day.

In addition, ABP have also agreed to sponsor the football kit for a new all girls team the first training day for which took place on Saturday 24th October. The club received an outstanding response to the female only training day with around 44 girls coming along to try out.

The Roval Drive project has enjoyed input from a number of community groups and Immingham Town Council, which has backed the idea from the beginning and is the sole maintenance contractor for the grounds.

Immingham Town Council Clerk, Dave Jackson said: “When we heard about what Mark was trying to do for the Immingham Pilgrims, we couldn’t have been happier. Childhood obesity has been increasing in the region over the years and with initiatives like this, it gives children in the area a place to keep fit and have fun.”

Mike Sellers, ABP Port Manager for Grimsby and Immingham said: “It’s fantastic to see the effort that is being made for the children of the town. We couldn’t be more delighted to sponsor the new girls’ team kit and help with the renovation. I look forward to seeing the building when it’s finally complete.”

If you live in the locality and have a child who may be interested in joining the football team, please visit the Immingham Pilgrim’s Facebook page for further details.