Mexico City airs an increase in its aviation connections 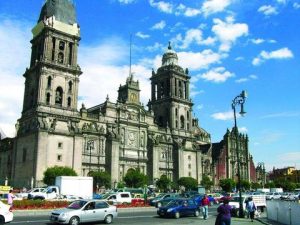 The capital’s international airport is already the number one in Latin America in terms of daily operations.

In the past six months, seven air carriers have announced plans for new routes or expanded services from North American and European cities to what the Lonely Planet guide describes as a “high-octane megalopolis.”

“This is an exciting time for Mexico City, which is the premier tourist destination in the country, with more than 13m visitors a year, ” said Magda Sánchez, director of major events for the Mexico City Tourism Trust, during the World Travel Market 2015 in London.

With the Mexican national tourist office being the Official Premier Partner of the 2015 travel show, officials from the capital were keen to advertise that “it is a great place to visit right now” as much as the coastal destinations including Cancún on the Yucatán Peninsula.

From January 2016, Air France will offer three flights a week with the super-jumbo jet between Paris Charles de Gaulle and Mexico City. From the end of March 2016, the aircraft will fly the route daily. This aircraft type offers 20% more seats than the Boeing 747 that has been in use up to now on the Paris-Mexico route.

During the summer 2015 season, the Air France-KLM Group operated up to 23 weekly flights to Mexico from Paris Charles de Gaulle and Amsterdam Schiphol.

The Mexican capital’s airport is only 13 km from the central area, to which it is connected by the largest public transport system in Latin America. The city has 130, 000 taxis – six times as many at London, noted Ms Sánchez.

She said that her city was ready for an increase in visitors, with almost 15, 000 hotels in all categories and recent renovations and developments in the superior category. She listed several multi-million dollar projects, including a $40m renovation of the Hotel Intercontinentale Presidente Mexico City. 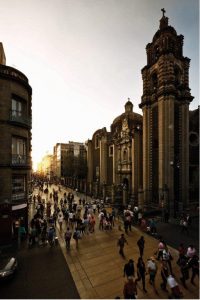 In fact the UK market is the largest in Europe in terms of visitors to the huge capital, which has a population of 9m, and including the surrounding area a total of 20m.

It is keen to gain additional business by way of meetings and conventions, with ample resources headed by the Centro Banamex which can take up to 50, 000 visitors at a time.

Eight of the city’s establishments made it in September 2015 to the Latin America 50 Best Restaurants List compiled by San Pellegrino & Acqua Panna.

The metropolis has 150 museums and is boosting its contribution to the fine art scene beyond its most famous artists, Diego Rivera and Frida Kahlo, with more than 100 contemporary art galleries.

There have been extensive reports for instance by the US Department of State Bureau of Diplomatic Security, of crime against people and cargo transits throughout Mexico, including the capital. Ms Sánchez said that the federal district did not share the problems of some of the other states, and cited public protection measures, and a crime index that had fallen in the past year.

The UK Foreign Office, which offers highly detailed advice, says on its website: “Passengers have been robbed and assaulted by unlicensed taxi drivers including in Mexico City. In Mexico City, use the better regulated ‘sitio’ taxis from authorised cab ranks. At airports, use only authorised pre-paid airport taxi services… Dress down and avoid wearing expensive jewellery or watches.”  While warning of street crime and other problems, the Foreign Office adds: “424, 860 British nationals visited Mexico in 2014. Most visits are trouble-free.”

In a different dimension of crime that may attract rather than repel potential visitors, the opening chase scene ofSpectre, the new James Bond film, is set in Mexico City.