IMO has participated in celebrations marking the 70th anniversary of the United Nations. This includes sending the UN’s digital ambassador Elyx, the cartoon character specially developed by renowned French artist Yak, to see IMO’s headquarters and work in the field. Elyx’s virtual journey around the world in 70 days shed light on the work of the UN, with UN agencies and other bodies contributing to show Elyx interacting with different areas of their work, and sharing the results via social media. 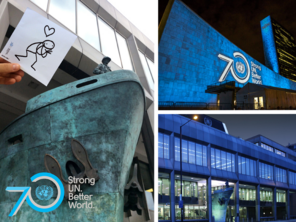 Additionally, around 200 iconic monuments, buildings, museums, bridges and other landmarks in nearly 60 countries around the world were lit up in UN blue. See IMO’s contributions here.