Another success of the Hellenic Coast Guard off Crete 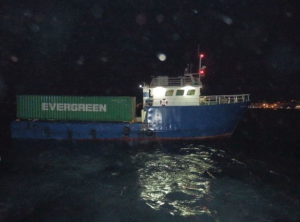 The m/v Rosetta with the containers onboard carrying contraband cigarettes

Using reliable information appropriately coming from one of its patrolling aircrafts, the Hellenic Harbour Corps/Hellenic Coast Guard located in the early hours of yesterday, a large quantity of contraband cigarettes carried on board the Tanzanian flag m/v Rosetta.

An immediate operation was organised and a team from a HCG patrol boat boarded and seized the Rosetta where they found that two of its four containers on board contained contraband cigarettes.

A further search in the wider area took place and a fishing boat was spotted sailing, though without her fishing apparatus, close to the Rosetta. In another search operation by members of the Harbour Corps of Ierapetra, 2, 092 cartoon cigarettes boxes where found floating at sea; same were collected by the Hellenic Harbours Corps. These boxes were thrown at sea by the fishing boat’s crew which were also arrested.

Moreover and following information by the two arrested fishing boat’s crew members, in a country-side court yard two cargo-lorries/trucks were found. Both trucks were fitted with conveyor belts and three more people were arrested.

The above operation is within the plan of systematic and intense search controls which the Hellenic Harbour Corps/ Hellenic Coast Guard performs in combating any type of organised crime and chasing of contraband.

An investigation is underway in order to assess whether there more persons involved in this event. The actual quantity of the contraband cigarettes as ell as the loss of customs duty will be available in due course, with an updated announcement.