How the cruise industry is innovating to attract new customers… 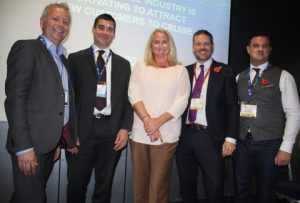 Executives in the 22m-passenger cruise industry are continuing to experiment and search for new ways to boost custom. They are especially keen to develop further the lucrative UK market, where passenger numbers have been static at 1.7m a year.

This was evident from a panel discussion on cruising innovation at the London 2015 World Travel Market, even though the latest ships have novel features in entertainment and dining and much in the way of the latest technology, on top of a wide choice of destinations “from Alaska to Zambezi, ” as the introductory notes to the session put it. “The cruise industry is known for innovation on board, ashore and in the ways it works with travel agents and customers, ” said the introduction.

Four experts explored the strategies of cruise lines in terms of product development and marketing, and what lessons could be shared with others in the travel industry.

Stuart Leven, managing director for UK & Ireland at Royal Caribbean Cruise Lines said that much depends on “how we market the right things at the right time to the right people.”

Royal Caribbean launched its largest ship,  Anthem of the Seas, in April 2015 and deployed it immediately for the summer season. With spectacular facilities on board, the ship is viewed by the company as having a strong appeal to a new generation of cruise passengers.

Jos Dewing, managing director of Voyages to Antiquity, said: “Even a small company like us, with one ship, we are tending to innovate with the technology.”  The company’s 350-passenger Aegean Odyssey is assigned to coastal cruising to inlets of the Mediterranean that larger ships cannot reach. The ship is also deployed to “the great rivers of Asia, including the Saigon and Yangon Rivers, as well as Spain’s Guadalquivir River, for a unique combination of ocean and river cruising, ” says the company website.

He referred to an initiative by Celebrity Cruises in co-operation with supermarket group Waitrose to make travel-inspired short films featuring national cuisines. These showcased “superior food and drink and unmatchable travel experiences.” One such was a feature on the port wine business based on Oporto. Celebrity ships call at the northern Portuguese city, and at Lisbon.

Moderator was Andy Harmer, director of Cruise Lines International Association, who said that with many ships coming to market “how do you cut through and get your message across?”

Lisa McAuley, commercial director UK and Ireland for luxury cruise line Silversea, said: “We are all so reliant on the trade for distribution.” It was a question of having the agents on your side as much as the consumer.

During the discussion, it was suggested that the Great Lakes would be the next big market to be opened up.

The CLIA, established in 1975, is the world’s largest cruise industry trade association, “providing a unified voice and leading authority of the global cruise community.” It has more than 60 member cruise lines from ocean to specialty cruise ships, which the association says represents some 90% of global cruise capacity; 275 suppliers and partners to the lines, including ports and destinations, ship development, suppliers and business services; and 13, 500 travel agency members.

A marine thread ran through the World Travel Market, with a variety of offerings on show.

Among them, Quito-based Metropolitan Touring publicised its new ship Santa Cruz II, the replacement for its original vessel Santa Cruz which had operated itineraries to the Galapagos for 36 years. The latest ship is the refurbished ex-Mare Australis and with its 50 cabins for 90 guests completed its maiden voyage on October 14 2015. The five-deck “expedition vessel” is one of the 63 ships licensed to operate to the islands, where tourist numbers are restricted in an attempt to minimise interference with the delicate ecosystem.

A double SNAME honour for Bureau Veritas’ Chahalis and Kokarakis!