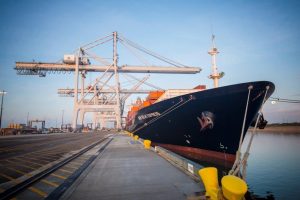 Navis, a part of Cargotec Corporation, and provider of operational technologies and services that unlock greater performance and efficiency for the world’s leading terminal operators, today announced that Barbours Cut Container Terminal (BCT), part of the Port of Houston Authority, has successfully completed its implementation of the Navis N4 terminal operating system (TOS). This go-live is part of a larger effort underway at the Port Authority to update terminal operations to more modern hardware and software technology platforms.

The Port of Houston Authority, which operates the Barbours Cut Container Terminal and Bayport Container Terminal, handles about 67 percent of all containerized cargo in the U.S. Gulf of Mexico. This represents approximately two million TEUs annually between the two terminals. The Port Authority’s container handling facilities are among the most advanced operations in the nation.

An arial view of the Port of Houston

Bayport was the first terminal of the two to undergo the modernization of its terminal software, transitioning from Navis’ SPARCS Express software to N4 in 2013. As part of a master-planned redevelopment, the Port Authority redeveloped more than 20 acres at Barbours Cut for container stacking and is currently in the process of commissioning four new SPP cranes on a newly renovated 1300 foot segment of dock.

The expansion of the Panama Canal is expected to bring an influx of larger ships. In anticipation of the expansion, BCT is working to invest in the modernization of its terminal infrastructure to prepare for the expected increase in demand.

“We are excited about moving Barbours Cut Terminal from our existing SPARCS Express application to N4. We’ve been operating N4 at our Bayport Terminal since 2013 and have been extremely pleased with its performance, ” said Jeff Davis, Chief Port Operations Officer for the Port Authority. “The upgrade at Barbours Cut will allow our organization and stakeholders to enjoy the benefits of N4 as well as allow the use of one common platform at both facilities.”

In recent years, the terminals under the Port of Houston Authority have been focusing on the maximization of terminal productivity for all stakeholders, minimizing truck turn time and continuing to operate in a safe and environmentally responsible manner. Terminal executives are improving cross-functional communication with industry partners as well as preparing for anticipated increases in volume by investing in organizational, technological and capital improvements.

“Our N4 TOS remains the optimal choice for terminals looking to integrate multiple terminal technologies under one operating system, including both hardware and software from multiple vendors across the industry, ” said Chuck Schneider, VP & General Manager Americas for Navis. “We are happy to have been given the opportunity to help the Port of Houston Authority improve terminal productivity and efficiency with our TOS and we are certain that with Navis’ support, BCT will continue to grow and improve its ROI.”