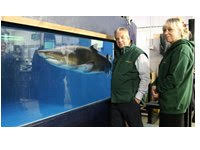 Alan Corson, director DTAC and Catherine McGivern, sales executive, DTAC, both based at the company’s office in Plymouth.

Davies Turner, the UK’s leading independent freight forwarder, has helped to bring the first-ever Sand Tiger sharks bred in captivity from South Africa to the UK.

The shipment was facilitated by Davies Turner Air Cargo’s (DTAC) Aquatics team which acted as clearance and handling agent in the UK and was responsible for road delivery to Plymouth from London Heathrow airport.

The two Sand Tiger sharks, cousins to the great white shark, were destined for the National Marine Aquarium, the UK’s largest aquarium.

The sharks, named Mandela and uShaka, were exported from the South African Association for Marine Biological Research (SAAMBR), a not-for-profit organisation in Durban.

The fish were transferred by road from Durban to Johannesburg using a ventilated closed truck. They were flown to London Heathrow Airport, with the movement from the aircraft to the Heathrow Animal Reception Centre (ARC) undertaken by a temperature-controlled truck, set at 22 degrees Centigrade.

Ben Southern, livestock manager, Davies Turner Aquatics joined staff from the NMA to oversee the arrival and observe water changes to the tanks in which the sharks travelled before they were then trucked to Plymouth on the same temperature-controlled truck.

Davies Turner Group chairman Philip Stephenson explained: “Sharks can have a bad press, but these two posed no threat to our staff. Moving living cargo always presents unique issues; they are after all the most perishable of freight. Our staff worked in close co-operation with the ARC, MNA and the airline to ensure the safe arrival in the UK and transfer to Plymouth of these lovely creatures.

“The Sand Tiger shark is vulnerable in the wild and the work of organisations like NMA and SAAMBR is a valuable attempt to protect them by raising awareness and exposure. Despite a fearsome appearance due to needle sharp teeth, Sand Tiger sharks are relatively placid creatures that would rather swim away than have interactions.

“Davies Turner is pleased that we have played a useful role in the first ever movement of Sand Tiger sharks bred in captivity from one aquarium to another.”

Davies Turner Aquatics is one of several niche or specialist services that DT Air Cargo offers in addition to its general airfreight and supply chain management services.  Davies Turner Aquatics has specialist expertise in moving a wide range of fish and associated products, offering consultancy in meeting individual requirements, or building long-term partnerships with clients, suppliers and partners worldwide.

The Aquatics team handles both freshwater and marine fish as well as plants and invertebrates.  DT Aquatics only provides services for bona fide importers of ornamental fish, and public Aquaria for conservation purposes, but not for research.

Appointment to the GEODIS Management Board

GEODIS Countbot is to carry out the annual...