Dr Karen Purnell, the Managing Director of the International Tanker Owners Pollution Federation (ITOPF), who sat on the award judging panel alongside representatives from INTERTANKO, IACS, UK MCA and Scorpio Tankers, said: “It is a challenge to identify opportunities that assist shipowners in meeting environmental standards cost-effectively and that don’t end up creating new environmental problems. The COMPAC system meets this challenge and it is for that reason – and the system’s simplicity – that we were able to present Thordon Bearings with the award.”

Dr Purnell added that the award-winning COMPAC system will reduce oil seepage into the marine environment and, as such, complements ITOPF’s remit.

“Thordon Bearings has an established pedigree and is very transparent about the system’s CAPEX and operational cost savings. The COMPAC system is not limited in scope and can be applied to all types of vessels, so has good chance of succeeding, ” she said. 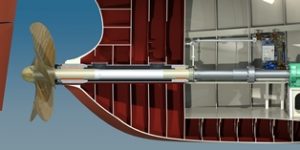 Clearly delighted with the award, George Morrison, Thordon Bearings’ Regional Manager West Europe and Africa, said: “To have won this year’s Tanker Shipping & Trade Award is the icing on the cake of a very good year for Thordon Bearings.

Thordon’s COMPAC bearing system prevents the seepage of millions of litres of oil into the world’s oceans and reduces ship operating costs associated with aft seals and lubricating oil. Risk of costly emergency aft seal repairs is eliminated, while the higher CAPEX associated with corrosion protection for Thordon systems, are more than offset by lower maintenance and operational costs associated with the oil based system. And there is no risk of pollution.