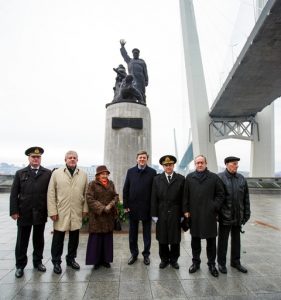 Monument to the heroic deeds of seafarers from the Soviet merchant fleet that lost their lives in the Arctic convoys of the Great Patriotic War (Second World War), by the Zolotoy Rog Bay Bridge in Vladivostok, Russia*

Russia’s Admiral Nevelskoy Maritime State University in Vladivostok held a series of events to celebrate the 125th anniversary of its foundation during 12-14 November 2015. Significant amongst a series of events organized to note this anniversary was a wreath laying ceremony, at the monument in Vladivostok in Russia’s Far East dedicated to many hundreds of Soviet merchant seafarers that lost their lives in the legendary Arctic conveys from 1941-1945.

These convoys, which sailed from North America, the UK and Iceland chiefly to Archangel and Murmansk in the former Soviet Union and now part of modern day Russia,  proved to be critical in helping the Allies in their fight against Nazism.  Much of the Soviet Far Eastern fleet was lost in the Barents Sea, protecting the convoys, as were many British, other allied and enemy vessels along with hundreds of their crew members.

In attendance at the wreath laying ceremony was: Sergey Frank, Honorary President of the Admiral Nevelskoy Maritime State University, as well as President and CEO of PAO Sovcomflot – Russia’s largest shipping company and a global leader in energy transportation by sea. Among the guests of honour were: The Princess Olga Kulikovskaya-Romanova – widow of Tikhon Nickolaevich Kulikovsky-Romanov, the nephew of Tsar Nicholas II and grandson of Tsar Alexander III, after whom the original maritime college in Vladivostock and forerunner of today’s Admiral Nevelskoy Maritime State University was named; Viktor Olerskiy, Deputy Minister of Transport of the Russian Federation; Sergey Gorelik, Acting Head of the Federal Agency for Marine and River Transport; Alexander Davydenko, Advisor to the Minister of Transport of the Russian Federation and others. PAO Sovcomflot Group was represented by Evgeniy Ambrosov, Senior Executive Vice President General and Alexander Orlov, Director of the Vladivostok Representative Office of SCF Unicom.