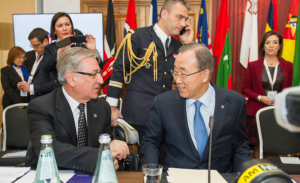 Secretary-General Ban Ki-moon (right) confers with Karmenu Vella, European Commissioner for the Environment, Maritime Affairs and Fisheries at a special session on climate change as the Commonwealth Heads of State and Government meet in Malta. UN Photo/Rick Bajornas

27 November 2015 – United Nations Secretary-General Ban Ki-moon took his call for urgent action on climate change to the Heads of Government of the 53-nation, 2.2-billion-people-strong Commonwealth today, declaring that the stars seemed aligned for at last making major progress on the issue.

“We must take action. We have spoken for a long time – at least 20 years, longer than 20 years – and the science has made it plainly clear, ” he said at a news conference on the margins of the Commonwealth summit in Malta, on the eve of the two-week-long UN climate change conference, widely known as COP21, opening in Paris on Monday.

“Now I hope this will [also] be the last place to talk about this and I hope we have a good and ambitious agreement in Paris, ” he stressed, citing the years of effort to rein in greenhouse gas emissions that threaten to radically impact the world as we know it, from rising sea levels overwhelming low-lying island States to devastating droughts and floods. 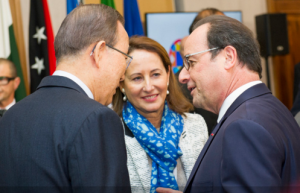 “I think that [now] all the stars seem to be aligning. There is a strong commitment, not only from the Government but from the business communities and civil society.

“And people on the ground, urge the leaders of today to make this world better and environmentally sustainable so that our succeeding generations can live in peace and harmony and prosperity, in a safer way, ” he added.

“We are going to make it happen and the time for taking action is now. We cannot again delay or postpone it until tomorrow.”