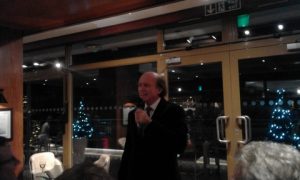 Andreas A. Tsavliris delivering his speech

The Tsavliris Salvage Group Christmas Season Cocktail Reception last Tuesday at the Britannia Room of the Royal Thames Yacht Club in the heart of Knightsbridge, broke another record, even above that of 2013 – coincidentally a Tuesday, when more than 350 guests enjoyed the first major event of its kind in the administrative capital of shipping, London!

We overheard interesting discussions on the shipping markets, the BDI’s drop being the number one concern, but equally the rise in the freight rates of tankers – dirties in particular, politics with the Migrants and Terrorists issue being top of everybody’s…agenda, the Greek financial trouble and conflicts from Gibraltar to Afghanistan, how safe is the use of LNG as bunkers… A great evening of business networking but entertainment too as the Festive Season is on for yet another month! Excellent drinks and canapés complimented the evening, and as always an event to meet friends from the past! 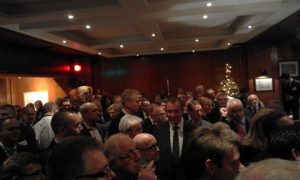 A full house listening to Andreas A. Tsavliris speech

Our hosts, two of the Tsavliris brothers, Andreas and George with family members and colleagues from the Piraeus and London offices, did, together with the RTYC personnel, their best to entertain us. Milena A. Tsavliris, Mirela A. Tsavliris, Natalia A. Tsavliris, Alexander G. Tsavliris with his wife Eleni, Konstantine G. Tsavliris. There was Lia Panagopoulos, head of marketing and PR from Tsavliris’ Piraeus office, Christina Sakkas, and as always Jan May, the person behind all Tsavliris’ London events!

Andreas A. Tsavliris with his wife Milena, daughter Natalia Tsavliris, Pericles Vassilopoulos and his elder daughter Mariela A. Tsavliris

Andreas A. Tsavliris delivered this years’ annual Christmas speech*, and as you will hear herebelow in the live video, he covered all aspects: the Salvage industry and LOF in particular, the Tsavliris Group successes, world geopolitics, the Greek saga – being optimistic, and some family good news (there is always something in the air from the vast Tsavliris’ family to hear more or less every year!). Tradition and respect too for the Group’s founder, the late Alexandros Tsavliris , an interesting mentioning! 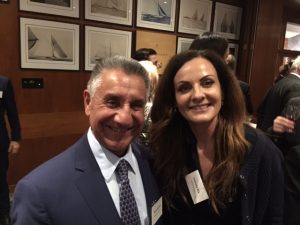 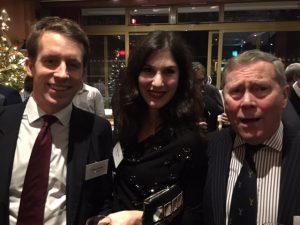 * Some of the main points of Andreas A. Tsavliris’ speech, in case same cannot be heard clearly on the video, are: