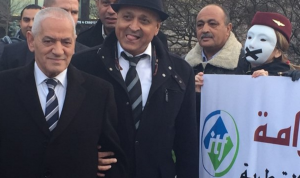 Nobel Peace Prize winner Houcine Abassi has shown his support for workers at Qatar Airways who are fighting for respect and dignity at the company.

11/12/2015 – Talking to protestors in Oslo, Norway he said: “I support your cause, Qatar Airways workers need trade union rights”.

Mr Abassi was in Oslo to receive the prize on behalf of the Tunisian General Labour Union (UGTT, Union Générale Tunisienne du Travail), of which he is secretary general.

The UGTT was part of the National Dialogue Quartet in Tunisia that was awarded the Nobel Peace Prize for its contribution to democracy in Tunisia in the wake of the 2011 revolution.

Trade unions led the post-revolution democratic process in Tunisia as the only popular institutions able to bring people out in support of the new constituent assembly.

Mr Ramadan said that the labour practices of companies like Qatar Airways puts at risk all they have gained: “Qatar Airways’ expansion in Tunisia is now one of the greatest threats to economic and, therefore, democratic stability in our country. It violates its workers’ rights and has systematically attacked attempts by them to unionise. In our journey to democracy we have shown how unions contribute to a strong civil society and economy.”

ITF president Paddy Crumlin welcomed Houcine Abassi’s support. He said: “This is a reminder that in the fight for workers’ rights at Qatar Airways the unions are just asking for human decency, and we have the backing of all decent people.”

For more about the ITF’s campaign for workers’ rights at Qatar Airways see here and here.