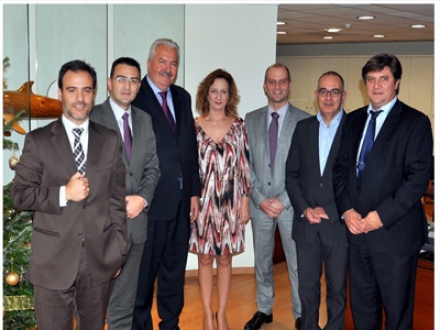 Following the General Meeting of  the Association of Banking & Shipping Finance Executives of Hellenic Shipping in order to elect the new governing body, the following have been elected:

Nicolas Vouyioukas fROM 3V Consultants as president; Vassilis Mantzavinos from Unicredit Bank as first vice president; Konstantinos Economou from Piraeus Bank as second vice president; George Xyradakis from China Development Bank/XRTC as General Secretary; Katerina Fitsiou from XRTC as Treasurer; George Laios from the Royal Bank of Scotland as alternate/substitute General Secretary and Konstantinos Ioannou from the Bank of Piraeus as member. Alternate members where elected: Antonis Lamnides from HSBC and Konstantinos Koutsoubelis from Freeseas.

Unfortunately the first president and founding member of the Association Alexandros Tourkolias, due to his known health issues, couldn’t make it for the first time and his was unanimously elected as Honorary President; the governing body and all the members wishing him also quick recovery.

In this day and age due to the well-known problems in the shipping industry, the contribution of all at the governing body and all the members towards an exodus from the crisis to all intents and purposes, is more than essential!