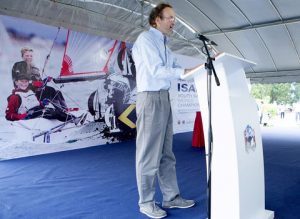 The 45th edition of the Youth Sailing World Championships has been declared open by World Sailing Vice President Chris Atkins at the opening ceremony in Langkawi, Malaysia.

During the ceremony, 425 sailors, 125 coaches and officials from a record 76 countries paraded towards the Astaka of the Lagenda Park with their national flags waving for all to see.

The event breaks all previous numbers in terms of participation and number of nations. The previous best of 67, achieved at the 2014 event in Tavira, Portugal, was easily surpassed with a number of new and returning nations in Malaysia.

Competing in five classes across nine events, the sailors were introduced before the traditional Mixing of the Waters in which sea water from each country, brought by the sailors, was mixed and later poured into the Malaysian sea as a symbol of their participation. 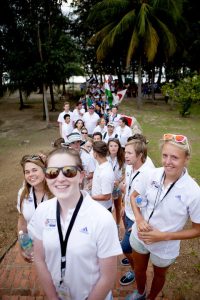 During the opening ceremony World Sailing Vice President Chris Atkins thanked those involved in organizing the championships, coaches and supporters in attendance as well as the sailors.

Atkins also highlighted the importance of the event saying, “The Youth Sailing World Championships gives the sailors from the very largest to the very smallest country of the world that vital stepping stone from their junior sailing to the Olympics. It gives the sailors the first opportunity to be selected and then represent their country at an international event.”

He continued, “We couldn’t do this without our boat manufacturers. They are the people who have to cope with the growth of this fantastic event. Laser Performance and Constant Wind. Ovington and UpMarine. Nautivela, Neil Pryde and Sirena Voile, thank you for your continuing support. It’s you along with the wind that allow us to go sailing.” 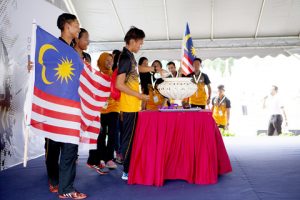 To celebrate the opening of the 45th Youth Sailing World Championships, Vice President Chris Atkins passed the World Sailing flag to the Malaysian Navy who had the responsibility of hoisting the flag to declare the event open.

Following the ceremony, the sailors enjoyed Malaysian cuisine on the Lagenda Park beach with the eagle at Dataran Lang looking over them ahead of racing while local dancers graced the stage with a cultural performance.

Attention will now turn to the first day of racing which is scheduled to start at 10:00 local time on Tuesday 29 December. Racing continues through to 3 January 2016 where nine Youth World Sailing Champions will be crowned.

World Sailing is the world governing body for the sport of sailing.World Sailing is made up of 139 Member National Authorities (MNAs), who are its principal members, and responsible for the decision making process that governs the sailing world.There are currently more than 100 World Sailing classes, ranging from the small dinghy classes for young people up to 60 foot ocean racers. 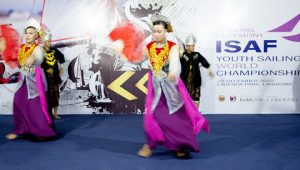 An aerial view of Rio-Antirio bridge