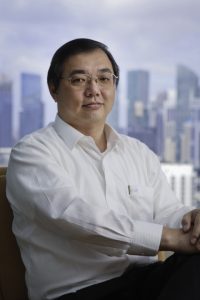 IBIA, the International Bunker Industry Association has appointed a new Regional Manager to manage its office in Singapore, covering the Asia region.

He started his career as a supervisor in an oil terminal and then worked as a senior surveyor for different surveying companies. He joined the bunkering industry in 1992 and was involved in the operations, sales and marketing, trading and purchasing of bunker fuel for an international shipping firm.

Mr Neo says: “I am delighted to take on this exciting role, the bunker industry is growing, but also facing an unprecedented level of industry challenges, not least the dramatic drop in the oil price and the increasing level of environmental legislation. IBIA’s members and potential members need our support, guidance and representation more than ever before. I look forward to working with them, and using my industry experience to deliver greater value, ensuring that IBIA’s services exceed our members’ needs.”

Peter Hall, Chief Executive, IBIA adds: “Simon has a unique set of experience with senior management experience with bunker and shipping companies, a previous Chairman of IBIA, understanding of the far east market and extensive government and industry contacts across the region. The association is well positioned in the region to develop the potential that exists to increase our membership base and influence in the region”.

Mr Neo will be managing the IBIA in Asia regional office, liaising with members and representing their interests with Governments, national authorities, shipping owners and operators across the region. IBIA organises specialist industry training, networking and social events in addition to a range of member working groups which analyse specific issues, feeding directly into representations to the relevant authorities.

Established in 1992, IBIA is the voice of the suppliers and end users of marine fuel – from the wellhead to the engine, with more than 760 organisations and members in 80 countries. The Association has expanded steadily since its inception, with a worldwide membership made up of shipowners, charterers, bunker suppliers, traders, brokers, barging companies, storage companies, surveyors, port authorities, credit reporting companies, lawyers, P&I clubs, equipment manufacturers, shipping journalists and marine consultants.

The International Bunker Industry Association (IBIA) exists to provide an international forum to address the concerns of all sectors of the international bunker industry; to represent the industry in discussions and negotiations with national and international policy makers, legislators and other groups and bodies; to review, clarify, improve, develop and endorse where appropriate, industry methods, practices and documentation; to increase the professional understanding and competence of all who work in the industry; to provide services and facilities for members and others as the Board shall from time to time consider appropriate. IBIA gained consultative status with the International Maritime Organisation (IMO) in November 2005 and is represented at all relevant meetings.

IBIA actively seeks to involve is members through its Annual Convention by educating and motivating members to conclude on major issues and topics of the time, creating the “IBIA Position” to present to IMO. IBIA champions the continued development of professionals within the bunker industry through its Bunker Courses and its Bunker Cargo Officer qualification.