Prowess of The Small Paintings Group on display… 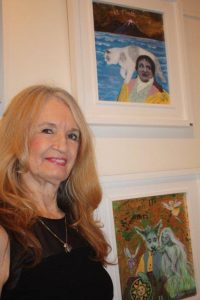 Linda Sutton with her paintings Il Matto and The Fairy Queen

Prowess of The Small Paintings Group on display at Piers Feetham Gallery, Chelsea

From the high notes of the opera house to the polar High North, the subject matter singled out by individual artists for the January-February 2016 exhibition of The Small Paintings Group ranges far and wide. This has ever been so. The group has thrived on its talented members’ blissful freedom of conceptualisation and their dedication and diligence since its inaugural show in 1991. Many of the early members continue to offer small-scale works that are superb microcosms bursting the bounds of mere cameos.

A quarter of a century on, the latest annual exhibition at the Piers Feetham Gallery in Chelsea arrayed 116 sensitively-executed canvases from 50 artists, all constrained by the maximum 30 cm size rule for the canvas, albeit without restriction of medium.

Opera – the magic vortex into which audiences become transported  – is a passion for Linda Sutton, who in this exhibition shows four acrylic works accomplished in her typically ethereal manner. They are inspired by performances she has witnessed – and indeed by supremely gifted singers who are household names, although as usual her compositions are not necessarily according to real-life casting. 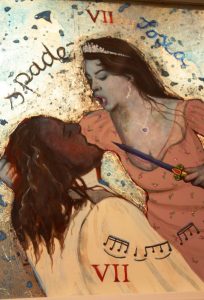 Linda makes her own star choices to hit the heights as she captures the maelstrom of emotions and action played through in climactic scenes, transfigured by almost mystical precepts.

All drama is her painting Tosca, which is embellished with silver leaf. Soprano Angela Gheorghiu is portrayed in the lead role, poised to deliver the death blow to the villainous chief of police Baron Scarpia who in this imagining is modelled on bass-baritone Bryn Terfel. The two stars did not in fact play opposite each other in this Puccini opera, but the pairing here seems so natural.

In the way the painting is displayed in the gallery,  Tosca looks down on a totally contrasting scene of reverie. Conjured up, against a beautifully hued starry sky, is a love scene from Le Nozze di Figaro and here Linda suggests that baritone Dmitri Hvorostovsky is playing opposite soprano Lucy Crowe. 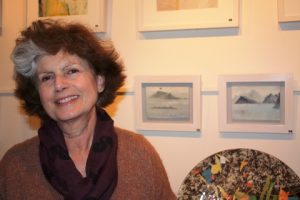 Two of Linda’s acrylics with gold leaf furthered the enchantment of her call of the theatre: her character for Il Matto is based on Simon Russell Beale; and anonymous but no less palpable actors for The Fairy Queen.

A world away from the cosy London setting that is the gallery was the locale for contributions from of the adventurous travel enthusiast Caroline McAdam Clark, many of whose distinctive paintings have over the years taken fresh approaches to marine themes.

Caroline showed a trio of oil paintings inspired by her July passage on a Hurtigruten ferry to the far north of Norway, where climate change is doing its melting best to dismantle ice cover. She captures the misty atmosphere she encountered on several days of the cruise, with the exception of a day of glorious 24-hour sunlight. 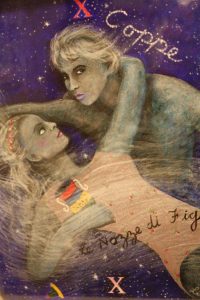 The three titles were Crossing the Arctic Circle 66° N,  Approaching Bodo 67° N and North Cape 71° N. The 67th parallel is some 50 km north of the Arctic Circle, and during the summer solstice at that latitude the midnight sun is visible.  The North Cape is the northernmost point in Europe, and the visitnorway.com website says: “Here, there is no dry land between you and the North Pole except for the Svalbard archipelago, and the summer sun never sets for two and a half months, between the middle of May and the end of July.”

Previously, Caroline, who lives and works in London and Suffolk, has produced a series of paintings inspired by the poetic refrains of the daily recitation in the BBC Radio shipping forecast of the names of coastal and sea areas, in addition to participation in many art shows and fairs.

In contrast to many of her earlier works featuring traditional landscapes and village-scapes and beautiful blue skies of Greece and its islands, Anne Wright was this time showing four oil paintings of Maltese architecture with its renowned sandstone glow. They were Cathedral, Mdina; Church in Gozo; View of Gozo and a view of the fortified city of Vittoriosa. 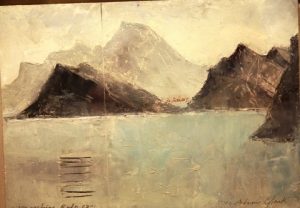 During her highly distinguished career, Anne has had 16 solo shows, and the Royal Academy Summer Exhibition and the Paris Salon where she won the Medaille D’Argent have accepted her submissions.

Her fondness for the Mediterranean and Aegean has become ever more intense as she has travelled extensively and lived in Greece, Spain and Morocco. As president of the Small Paintings Group and a member of the Chelsea Art Society, she exhibits with both.

A founder member and former president of the Small Paintings Group, Dennis Gilbert, is in his nineties and is as prolific as ever. He turns his hand to all manner of subjects, including portraiture, landscape and marine scenes. 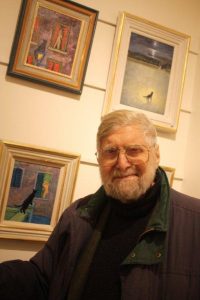 Dennis has a huge circle of fans and acquaintances: he taught at art colleges, latterly Chelsea School of Art, and has exhibited many times at the Royal Academy and at the Mall Galleries. Societies including the Royal Society of Portrait Painters, the New English Art Club, and the Contemporary Portrait Society, have welcomed his work.

Four intimate and intricate oils by Christopher Hall were among works admired. Christopher says he has “ploughed his furrow since leaving the Slade in 1954, painting scenes in Italy, France, London and Wales without looking over his shoulder to see what his contemporaries were up to.” He has a wonderful way with blossom and trees, and his oil painting of Carabias celebrates the character of an old street of the village of that name in the Spanish province of Guadalajara. Few people live in the village now, but it has a Romanesque church and attracts weekend visitors.

Many of the participants in the Small Paintings Group do paint on a larger scale, and the craft of working on pint-sized canvases should not be under-estimated. The society says: “The discipline involved in producing small, intimate ‘cabinet’ paintings requires a conciseness and directness all of its own and lends the works a particular freshness and intensity. Their compact size makes them both ideal for domestic interiors and very affordable.”

Since its inauguration the Small Paintings Group has had more than 30 exhibitions: at the Piers Feetham Gallery; Russell Gallery, Putney; Chappel Galleries, Colchester; and elsewhere. 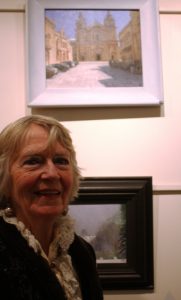