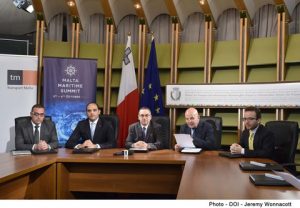 The Malta Maritime Summit was officially launched this morning, Tuesday 9th February, 2016, by the Minister of Transport, the Hon. Joe Mizzi, during a press conference held this morning at the Ministry of Transport and Infrastructure, in Floriana, Malta. The press conference was attended by the Chairman of Transport Malta Mr. James Piscopo, Mr. Ivan Sammut, Registrar General of Shipping and Seamen, Mr. John A. Gauci-Maistre, CEO of GM Conferences & Exhibitions Ltd and Dr. Jean-Pie Gauci-Maistre, Legal Advisor to the Malta Maritime Summit.

Malta has always been a maritime nation as its location has made it historically the most sought after island in the Mediterranean, by traders and world leaders alike. As the maritime world evolved, Malta’s maritime importance came to the fore. As it ranks as one of the leading Ship Registers in the world, Malta has asserted itself as a major player not only in flag State Administration matters but also in other maritime related affairs. It is nowadays a major player in a highly competitive industry and therefore its responsibilities and obligations have increased tremendously.

For this reason the need had long been felt for an International conference to be held, where International and Maltese stakeholders would have the opportunity to raise and discuss common interests. It would also place Malta on an equal footing with other maritime nations and serve as platform to make its position more visible in an industry that is responsible for the carriage of more than 90% of the world trade. It is also very much in line with the Government’s objective to further consolidate Malta’s position as a centre of maritime excellence in the Mediterranean, and it is very encouraging that the Ministry of Transport and Infrastructure and Transport Malta are supporting this first Malta Maritime Summit to be held in October later on this year.

This conference, which will be themed “The Voice of the Industry”, is intended to be different as its aim is to stimulate heated but constructive debates among speakers, panellists and delegates. Spread over three and half days the conference would seek to raise regulatory, operative, safety, ecological, energy and financial matters among others. High level speakers are expected to be present, including some of the leading maritime executives. This is yet another initiative for Malta to continue consolidating its leading role within the maritime industry not only in a proactive approach but also by creating more consciousness of crucial topics, in an industry that is continuously under threat by external forces and vulnerable to unstable economic dynamics.

A highly important point is that this summit will also be another good opportunity for Government to listen to the maritime industry’s views on pertinent issues having a direct impact on the industry since it will be held just before the start of Malta’s Presidency of the EU Council in January 2017.

The Press Conference addressed by the Minister of Transport – the Hon. Joe Mizzi and by John A. Gauci-Maistre K.M. CEO – GM Conferences and Exhibitions Ltd promotor of the conference