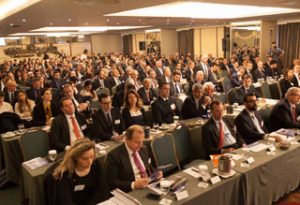 The 7th Annual Capital Link Greek Shipping Forum will remain in history as the most timely event of its kind, given the fact that the market  is at its lowest historical levels and the prevailing situation as well as  conditions on Planet Ocean are far worse than once anticipated (that’s what in 2010 the hoi-polloi were insisting).

At a full house at the Divani Caravel Hotel in Vouliagmeni, Nicolas Bornozis and his internationally well-known sister Olga – the Greek conference leader in her own right, together with their team, produced one of the best ever events.

Our Man in Havana errr …in Athens was there informing us* of the excellent deliveries and discussions and we could not be more pleased as family, friends, school mates, clients and supporters as well as partners of www.allaboutshipping.co.uk were there in full force! 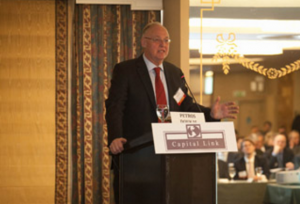 After the welcome and opening remarks by Nicolas Bornozis, my primary school buddy Petros Doukas  took the podium and delivered a more than down to earth speech on whether the  global economy really is  in such a mess?

The Bank Finance and Shipping panel also included, amongst others, IMIF member and friend Michael Parker from Citi, representative speakers from supportive entities such as DVB Bank and was well moderated by Jesel Chauhan from client and supporter  legal entity Holman Fenwick Willan!

Stuart McAlpine from Clyde & Co, another supporter for many years well placed on the Far East, tackled the Evolving Landscape of Asian Maritime Finance; Chris Gregory Timagenis too gave an excellent performance on issues vis-à-vis  Greek Taxation – myths and reality…

Interesting points from the 40 minutes plus panel on acquisition of non-performing shipping loans – that’s a headache, or isn’t ?

Equally exciting, in our view, was the Restructuring as a Business & Investment Opportunity panel…

The talk on the Global Ports issue with the port of Piraeus being over the last ten years at the forefront of privatisation with all that jazz,   I mean the …socialist and lefty confrontations, was presented by Tassos Vamvakides…

The media and analyst turn with IHS Maritime & Trade’s Dalibor Gogic on “IHS reviews contrasting 2016 markets: Dry Bulk & Dirty Tanker” – issue for guidance only as I prefer to state when hearing and or reading such title/subject or themes… Reality bites as you know…

Following the above,   “heating” as well as “exciting” the mood of delegates, was the next panel theme on Market Trends in the Dry Bulk sector, with  major brokers and charterers having their say… Peter Malpas from Braemar ACM Shipbroking moderated the panel with  reps from Bunge, Louis Dreyfus Commodities and C Transport participating… 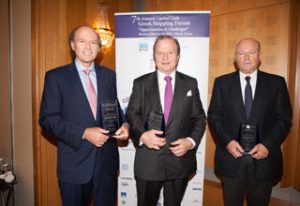 An hour-plus …break for lunch and attending the keynote address and Leadership Award Ceremony – a 28 minute procedure,   by the Emeritus Chairman of Intercargo and Chairman of A.G.Pappadakis & Co,   Nicky A. Pappadakis, another good old friend and supporter, for the honouring also of the Tsavliris brothers, Andreas, George and Nicolas from the Tsavliris Salvage Group. All three being above all friends, family and supporters as well as academia fellow students – Andreas do you read me… Their wives and many of their children being present too created an admirable, a unique atmosphere! Humour too, a great asset, particularly employed by George A. Tsavliris, once again on great form, lifting the spirits and offering with his brothers unique knowledge on their late father’s admirable career! It was a very touching ceremony and the fact of the Tsavliris’ family members presence and Niky Papadakis’ wife Haidi – always smiling, gave another momentum for admiration of the golden Greeks and their shipping achievements! I am sure all those present and all those reading and or listening the Audio Webcast will  pause and repeat this great word that Nicky Pappadakis emphatically mentioned: Team! 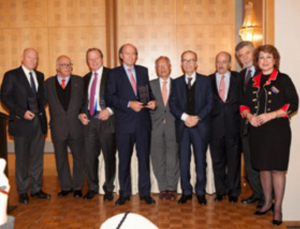 l to r: Nicolas A. Tsavliris, Capt. Panagiotis N. Tsakos, George A. Tsavliris, Andreas A. Tsavliris, Thimio E. Mitropoulos of the Maria Tsakos Foundation and Emeritus Secretary-General of the IMO, Pericles Panagopoulos, Nicky A. Pappadakis with Nicolas and Olga Bornozis

The Tsavliris brothers are those today fully epitomising this very important word for our shipping business success! Coincidentally Niki Papadakis being an old friend of the Tsavliris family since 1964, just over half a century was the best, not just to pay tribute and hand over the award, but also to simply make everybody understand the importance of Salvage, Safety at Sea and the Environment that continuously the Tsavliris family and their personnel on board and ashore and those being in synergy with them, offer to the shipping world today! 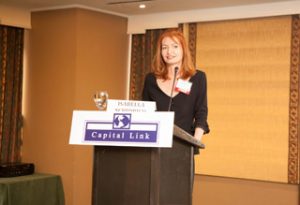 Money, money, money and the world goes round! The availability of funds today, mainly rests with the stock markets. The very eloquent Isabella Schidrich from our good friends and supporters NASDAQ, with whom we began recently  an excellent partnership, delivered an interesting paper on the US Capital Markets – Raising Capital overview. NASDAQ’s senior managing director 5minute and 15 seconds slides presentation was the one attracting the best comments; a very composed review of the situation with the unprecedented state of IPOs… A very good point was that on the market needing good quality companies, the current situation with the global economy, fiscal policy and the investors’ perceptions not aligning and any predictions until the end of the year are not wise. Volatility is on the 20 points level… was also a point well mentioned and hopefully understood…

Nicolas Bornozis nicely contributed to Ms Schidrich’s points by explaining the Changing Investor Landscape in US listed companies; a more than excellent presentation/ account, very useful for all present and anyone not present! Add the last words on the importance of Communicating Strategy and never to give up which received the warm applause of the delegates, particularly in regard to the Greek shipping mentality! 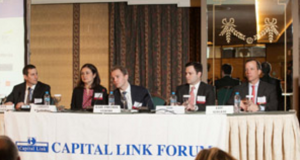 After Nicolas’s analyses came the panel eagerly expected by all present, which he competently introduced. Are capital markets open to shipping? What does it take to raise capital today? Steven Hollander from WFW had the difficult task of moderating this panel with powerful participants, such as Citi’s Christa Volpicelli, Clarkson Platou Securities’ Karl Staubo; Jefferies’s Todd Wilson, Morgan Stanley’s Wiley Griffiths and Eric Schless from Wells Fargo Security. This 40 minute panel inevitably left many questions and challenging points still to be addressed.

Before the analysts’ panel appeared on stage…, that on Private Equity, Joint Ventures and Alternative Financing  with Norton Rose Fulbright’s Dimitri Sofianopoulos moderating one of the most difficult shipping issues with Costas Karagiannis from Apollo Management, Nino Mowinckel from Breakwater Capital , naval architect Paulo Almeida from Tufton Oceanic and Andy… errr Andrew Garcia from Brentwood Shipping and Trading. A full 40 plus minutes; in retrospect more than interesting given some bold replies to the few questions posed! 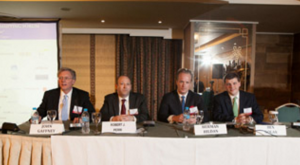 And the analysts with the respective Analysts’ Panel …had their day too; John Gaffney from Gibson, Dunn and Crutcher LLP acted as the moderator and Robert Peri from AXIA Capital Markets, Herman Hildan and Ben Nolan from Stiffel Financial Research did their best for 48 or so minutes to leave the clearest possible impression for their views.

Networking at the cocktail reception was at its best and we… “overheard” the following  one word epitomising the dilemma: scrapping, or demolition – recycling to be more politically and environmentally correct, being the name of the game. But wasn’t this the same magical buzz word in 1978!!!!  Another big issue was that the message this time, for the first time in many many years was to “hold” your breath for another  18 (eighteen) months. 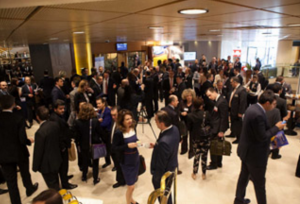 A bird’s… eye view from the finale; an excellent drinks and dips reception

All presentations are available on line and our viewers can log on in our site (www.allaboutshipping.co.uk)  on the right hand side where the event banner stands – and will stand for another week or so, to view and hear all presentations on  Audio Webcast: excellent!

Finally many congratulations to all sponsors , media partners and supporting organisations who together with Capital Link in cooperation with NYSE and NASDAQ offered the world and its stakeholders, in the heart of shipping, Piraeus/Athens Greece, the best professional forum of all times!

The Markets still on a slow motion and uncertainty!