On Climate: ‘Our task is not over, ’ says Ban Ki-moon… 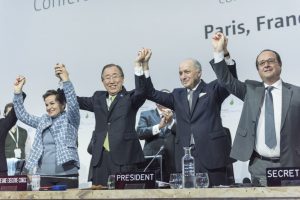 ‘Our task is not over, ’ says Ban, urging action on Paris climate pledges ahead of signing ceremony

17 February 2016 – While the international community has provided a solid foundation for the world’s response to climate change by adopting the Paris Agreement this past December, United Nations Secretary-General Ban Ki-moon said today that it is now necessary to build on that momentum in order to secure a safer and healthier future for all.

At a briefing at UN Headquarters in New York on the high-level signature ceremony for theParis Agreement, which he will host on 22 April, Secretary-General Ban Ki-moon said the ceremony will provide the first opportunity for Governments to advance the process that will lead to the Agreement’s implementation and ratification.

“Now we must move from aspirations to action, ” Mr. Ban said. “By implementing the Paris Agreement, we will be building the future we want – a future of shared opportunity that leaves no-one behind on a planet that is protected and nurtured for the benefit of all, ” he added.

Urging the participation of all Governments at the signing ceremony, the UN chief emphasized the importance of the Agreement entering into force as soon as possible.

“For the first time, every country in the world pledged to curb their emissions, strengthen resilience and join in common cause for the common good, ” he added.

In particular, the Agreement will enable the international community to “increase ambition on a regular basis, ” the Secretary-General said, which is essential in order to keep global temperature rise to well below two degrees Celsius, and pursue efforts to limit it to 1.5 degrees.

“We have no time to delay, ” the Secretary-General underscored. “I urge you to ensure that the legal requirements for your leaders to have full powers to sign are in place by that date, ” he said.

Mr. Ban noted that leaders from Peru, France and Morocco – the Presidents of recent UN climate change meetings, known as COP20,  COP21 and the upcoming COP22 – have agreed to attend the signature ceremony, and that many other world leaders have promised their attendance as well.

“The participation of Heads of State and Government will show the world they are determined to move forward as quickly as possible, ” Mr. Ban said. “It will keep the global spotlight firmly focused on climate change and build on the strong political momentum created in Paris.”

Mr. Ban added that all leaders will have the opportunity to make a national statement on the day of the ceremony. As such, he asked that leaders come ready to provide an update on how their Government will implement national climate plans and integrate them into their overall sustainable development plans, as well as provide a roadmap for increasing ambition over time to achieve the overall aim of limiting global temperature rise to well below two degrees Celsius.

He also asked leaders to be ready to indicate their Government’s timetable for ratifying the Paris Agreement, and to share how they are accelerating climate action before 2020 by drawing on the ingenuity, resources and efforts of all sectors of society.

“We need all hands on deck to meet the climate challenge, ” Mr. Ban stressed. “Cities, schools, the business and investment communities, faith groups – all have a role to play.”

The Markets still on a slow motion and uncertainty!