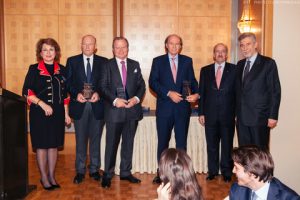 The “2016 Capital Link Greek Shipping Leadership Award” was awarded to the three Tsavliris Brothers of Tsavliris Salvage Group, in recognition of their unique and extensive contribution to Shipping and Greece and for their overall outstanding service to the maritime industry. The Capital Link’s 7th Annual Greek Shipping Forum was held on 16 February 2016 in Athens.

The Tsavliris Brothers were the fourth recipients to be awarded this most prestigious award. Previous recipients were Captain Panagiotis Tsakos, Pericles Panagopoulos and Lambros Varnavides (Baltic Exchange, RBS).
The Capital Link Forum was extremely well attended with over 1, 200 delegates. Not only was the number of attendees impressive but also the significant number of principals and senior people of the shipping and financial industry from Greece and abroad.

Capital Link’s President, Mr Nicolas Bornozis presented the Tsavliris Salvage Group as a successful, traditional, third generation shipowning and maritime services company. He referred to the Tsavliris Group founder, Alexander G. Tsavliris, and his achievements. He mentioned that “His legacy has been honoured and expanded on by his three sons Nicolas, George and Andreas Tsavliris whom we honour today”.

Mr Nicky A. Pappadakis, Chairman Emeritus, Intercargo and A.G. Pappadakis & Co., announced the award and praised the Tsavliris Brothers for their hard work, integrity and business ethics. He highlighted the importance of the great relationship and teamwork between Nicolas, George and Andreas Tsavliris. He also noted the historical ties between his family and the Tsavliris family going back to their respective founding fathers.

In his speech Mr Andreas Tsavliris said that “I believe that the success of our company is due to the high quality of our services which are appreciated by our clients. This award will only encourage us to maintain the same high standards and continue to improve wherever possible”.

Mr George Tsavliris, highlighted the importance of synergy amongst the brothers for the success of Tsavliris Salvage. In addition to praising their father Alexander G. Tsavliris, he also emphasized the great contribution of their mother Claire to the success of the family.

Mr Nicolas Tsavliris said that “The success of the company is due to the brotherhood, the blood bond and the love which exists between us and our families”. He thanked the Tsavliris Salvage staff for their loyal support, the Capital Link organisers and everyone in the distinguished audience “for the great honour you have bestowed upon our family and upon the memory of our Founding Father”.

Capital Link is a 20 year old Advisory, Investor Relations and Financial Communications firm with a strategic focus, among other, on the global maritime sector. Capital Link’s headquarters are in New York with a presence in London, Athens and Oslo. Capital Link has become the largest provider of Investor Relations and Financial Communications services to international shipping companies listed on the US and European Exchanges. Capital Link has focused on elevating the profile of Greek Shipping to a wider audience around the world, including investors, analysts, bankers, financiers and industry participants. Capital Link has been recognised by the 2011 Greek Shipping Lloyd’s Awards and in 2012, 2013 and 2014 by the Intercontinental Finance Magazine.

Tsavliris Salvage is one of the most active emergency response contractors for maritime casualties worldwide and the most frequent user of the LOF contract, having handled over 3, 000 casualties. With tugs on permanent stations at strategic locations worldwide, the Group’s international activities embrace every service relating to marine salvage & towage, extending to complex wreck removals and partnering today’s shipowners in fulfilling their obligation to protect the marine environment from pollution. Tsavliris is committed to maintaining a modern global network for providing rapid assistance to shipping. This is achieved through the deployment of its own salvage assets as well as co-operation with regional and international salvage firms.Tsavliris Salvage Group celebrates 100 years from the birth of the founding father, Alexander G. Tsavliris; 75 years from the commencement of the first Tsavliris shipping company and 50 years from the foundation of Tsavliris Salvage in 1964.